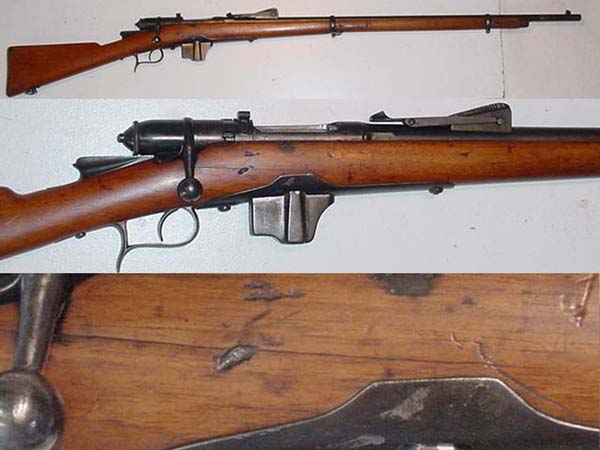 A product of a time when things were made by hand, the Model 1870/87 Vetterli Rifle was the standard weapon of the Italian army of the late 19th century. It has a very Jules Verne look to it and you get the feel it would be at home at a Steampunk convention—well that is until they found out it was an actual firearm and not something made up. Anyway, this 10.4mm blackpowder bolt gun is actually collectable, so fight off the goggle-wearing punkers and make your way back to the gun show pronto if you find one for sale.

They may be heavily armed apes, but they’re also frugal apes.

We know, we know, the Hi-Point carbine is super popular, reliable, so on, and so forth, ad nauseam, but you have to admit, it’s pretty homely. Early models of the gun came in a rather dapper soft plastic stock that looks like you stole the rifle right from those ‘damned dirty apes’. Well we all look like monkeys now because these guns are selling for nearly $600 after they made late night drive in appearances on the 2013 Assault Weapons Ban lists.

Did we say ‘Assault Weapons Ban’? Well let’s hop into Guns.com’s company time machine and travel back to 1994. That was when suddenly all of previously legal semi-auto sporters based on the FN, AR, AK, and other designs had to be modified to eliminate the evil that was the pistol grip. To do so and still keep the same basic firearm, manufacturers produced these rifles with the abomination that is the thumbhole stock. About the only thing this accomplished was a run on replacement stocks after the ban was sunset.  Kill it! Kill it with fire!

Thumbhole-stocked assault rifle of the 1990s. An answer to a question nobody asked.

If Liberace lived in the 1880s and wanted a long-range gallery shooter, he would have had a sweet Schuetzen on the wall. Schuetzen rifles, finely crafted heavy target guns, originated in Germanic countries in the 19th century. Brought to this country by immigrants, the German-Americans started local shooting matches that caught the eyes of the locals and by the late 1800s, the matches had become wide spread. Affluent society types attended the matches and, naturally had to have blinged out pieces of their own to show off while waiting for their turn at the target. This keeping up with the Jones’s arms race led to increasingly ornate designs that used scrollwork, exotic woods, and the like to create guns so beautiful that they were…well… bizarre.

Possibly the only good thing you can say about the aesthetics of this 22 pipsqueak is that the sight of it would likely send Diane Feinstein into a panic attack. Other than that, it is a dead ringer for an abstract painting of an M16 if you squint very hard and dim the lights, though they definitely didn’t have to worry about Colt suing them for copyright infringements. Made by Philippine juggernaut Armscor, it was at least cheap, selling for less than $200 in the 1980s.

The Armscor 1600. It’s like you played ‘Telephone’ with the M16 design from Hartford to Manila.

The Swiss have a firearms legacy that nobody really wants to poke a stick at. After all, they haven’t had to kick out an invader in 500 years even though they were geographically in the middle of both World Wars. But, have you ever looked at the SIG 510? Known in Alps as the Sturmgewehr 57, it was Switzerland’s main battle rifle for most of the Cold War. When most of the world still used wooden stocks, the Swiss went with rubber coated fore and buttstocks that were ribbed for your shooting pleasure. A very long rifle, it tipped the scales at nearly 13-pounds. Still, despite looking like stretched out taffy it shoots like a laser.

The SIg 510 or in Switzerland, the Sturmgewehr 57 or in gun forums “that long ass assault rifle”

With a design that looks as if it would make a factory worker sh*t terror, this space age piece of Commie steel was a three-barreled gas operated bullpup assault rifle that could rip out 1800-rounds of 7.62x39mm per minute for as long as its 90-round box (tub?) magazine held up. Its father, Hermann Korobov produced this 10-pound rifle that shot so fast that all three rounds of its single shot per barrel burst typically entered the same ragged hole. Designed in the 1960s, it was never adopted.

Even the AK was prettier than that thing. 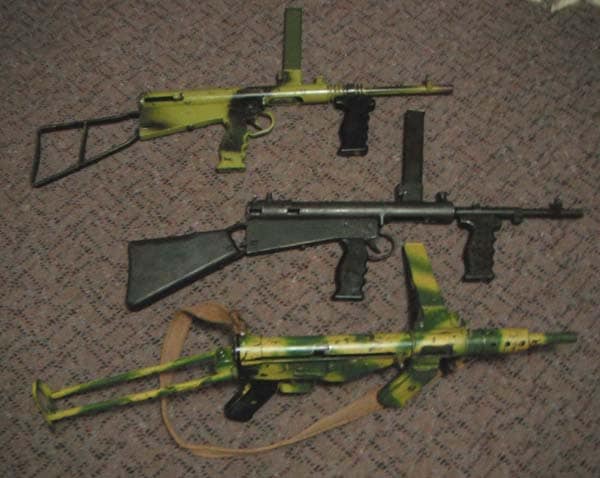 If you have a soft spot in your heart for WWII action movies, you cannot help but be a fan of the submachine guns of the era but that doesn’t mean these subguns are winning any beauty pageants. The Australian Owen looked like a cheap paint ball gun. Calling the M3 a Grease Gun insulted actual grease gun makers everywhere. The Sten looked so unsafe that many users wouldn’t even touch it. The Soviet PPS43 didn’t even look like it was finished before they put it into production. Don’t even get me started on the last ditch German and Japanese guns of the war. The one thing you will never hear about these chattering 45ACP, 9 milly, and Tokaraev-chewing burp guns is that they are pretty. So ugly they are beautiful maybe, but never pretty.