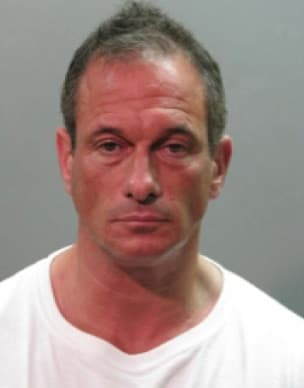 A man who entered a pharmacy and demanded Ritalin and Dilaudid in Bellmont, New York,  met his match Friday afternoon when the tire of his getaway car was taken out by an armed pharmacist

At first, the pharmacist handed over the drugs, but then followed the robber, who was later identified as Marc Gumpert, 43, outside. When Gumpert drew his knife and came towards him, the pharmacist then drew his revolver and fired a single shot at him.

According to a report by the Nassau County Police Department, the 34-year-old pharmacist, who has not been identified, missed the robber. The bullet ricocheted off the ground and hit the back tire of Gumpert’s 2011 Nissan Altima. He was still able to get a license plate number for the police.

A short time later, Gumpert’s car was spotted by a Nassau County Ambulance driver. He was arrested without incident and charged with first degree robbery and third degree criminal possession of a weapon, with his bail set at $250,000. The stolen pharmaceutical drugs were also recovered.

No one was injured during the incident, which also brought about support by some for concealed carry. Mary Nolan, a customer at the pharmacy, said, “He did the right thing. The pharmacist should be allowed to carry a gun.”

The pharmacist, who has a legal permit to carry the gun, apparently decided to arm himself after a recent increase in pharmacy robberies, including two high profile cases which ended in six fatalities.

Two years ago, on Father’s Day, four people were killed at a pharmacy in Medford when David Laffer, a prescription drug addict, entered the pharmacy looking for his next fix. Laffer was apprehended and is now serving a life sentence.

Only six months later, on New Year’s Eve, another prescription drug addict was looking to rob a pharmacy in Seaford. That attempted robbery ended in both an off-duty federal agent and the robber being killed.