One Final Major Shooting Competition Being Held in Colorado 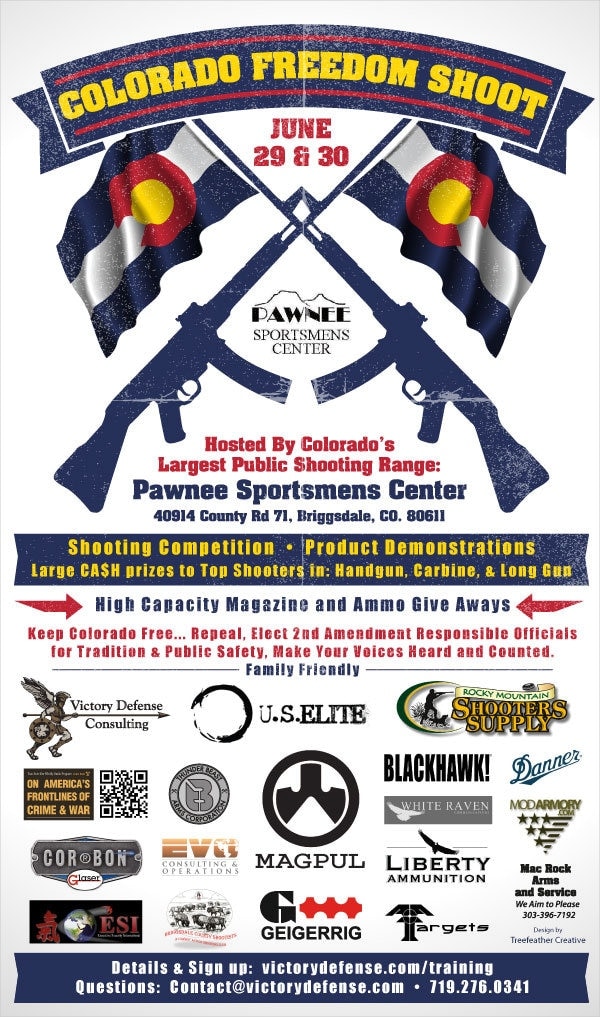 On the eve of new gun control taking effect on July 1 in Colorado, competitors of all ranks as well as spectators and other guests will be attending the Colorado Freedom Shoot taking place the weekend of June 29-30.

The “Last ‘High-Capacity’ Shooting Competition” as it’s being called will take place in Briggsdale, CO, in Weld county, at the Pawnee Sportsmen’s Center. The center has many shooting ranges and is opening up a new 1,000 rifle range where some shooting events are scheduled to take place.

The Colorado Freedom Shoot is a family-friendly event with solo and team competitions, shooting events, shows and something called the “Biden Challenge” which described simply as a “shotgun event.”

The competition is being held by Victory Defense Consulting and several other major sponsors from around the state including Magpul. The MOD Armory will be putting on a complete night vision demonstration showcasing both thermal and infrared imaging technology.

“Due to the recent legislation that was passed by the Colorado state legislature, this could very well be the last competition of its kind held in Colorado,” stated J.J. Sutton, President of Victory Defense. “This shoot is important because it’s the last shoot where one can acquire magazines that can carry, or be adapted to carry more than 15 rounds in the state of Colorado. Not only that, but the new legislation now sends jobs, manufacturers and tens of millions in revenue to other states — leaving many without jobs.”

Shooting events will take place on Saturday and Sunday, with individual events ranging from concealed-carry competitions focusing on drawing from concealment, accuracy and reloads to steel challenges, where people race guns and ring metal. There will also be carbine and long-range competitions and a night-vision shoot.

Sunday the competitions will focus on team games, with blind challenges presented to each shooter of each four-member team featuring “some or all of a selection of handgun, carbine and long range shooting platforms.”

With a vast majority of the state’s sheriffs and a whole host of other complainants filing suit against the state of Colorado, this may not be the last such event for too long.

More than 50 sheriffs have backed the lawsuit saying that the state’s new laws mandating background checks for all transfers and limiting magazine capacities are unconstitutional on Second and 14th Amendment grounds, and also violate the Americans with Disabilities Act.

This legislation along with other new laws have prompted several counties including Weld to consider secession from Colorado, forming the new state of North Colorado.

For more about the Colorado Freedom Shoot check out the event Facebook page and Victory Defense’s website.