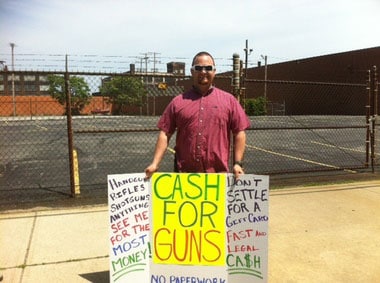 Cleveland held its annual gun buyback Saturday in an effort to collect unwanted guns in a safe manner and keep those weapons out of the hands of criminals, according to Cleveland.com. Altogether the city collected 352 firearms, including 311 handguns. The city would have collected even more, but a half a block away were private citizens putting in their own bids for the unwanted firearms.

The event offered plenty of incentives for residents to anonymously drop off guns in exchange for a whole plethora of goodies, provided the firearms being disposed of were the ones the city was seeking. According to Cleveland Police Sgt. Sammy Morris, the hot items at this particular event, which they were “actively seeking out,” were handguns and assault rifles — not to be confused with “assault weapons” as the two terms are sometimes wrongly used interchangeably. Of course, other guns were accepted at the buyback, they just didn’t reap any rewards.

For operable handguns, the city offered $100 gift cards for gas from Shell, groceries from Dave’s Supermarkets or merchandise from Target. Working semi-automatic rifles could fetch a tempting $200 gift card from the same merchants. Additionally, participants who turned in firearms could also receive two tickets to either a Cavs or Monsters game. But the grand prize for handing over unwanted guns at the event was the chance to win $1,000 from a raffle.

However, just a short way down the road, a couple of guys were also seeking to pick up unwanted firearms in exchange for cold hard cash, something which did not fancy well with Morris. But being that the United States is indeed a free country and the men weren’t doing anything illegal, “There’s nothing we can do to stop them,” Morris said.

Of course, the men looking to pay cash for the unwanted guns were simply offering an alternative for the residents. One man, who only wanted to be identified as John, is a gun collector who wanted to make sure that firearms with historical value were not merely melted down into scrap.

Another man, known as Gabe from Canton, said, “I’m here to save perfectly good guns from being melted down. We’re keeping them out of the wrong hands, too.” And if keeping these weapons out of the hands of criminals is the goal of the gun buybacks, than this should certainly be an acceptable alternative. There was no report on how many guns the men collected.

Morris said that while they don’t expect criminals to come turn their guns in, the buyback still helps to deter crime. “There are guns that people have had laying around their houses, maybe inherited from relatives. These guns are stolen from homes. This stops them,” he said. However, the effectiveness of this theory has fallen under much scrutiny, some arguing that the buybacks are nothing more than “feel good” efforts which in reality have no effect on decreasing crime.