Tracking Point Rifle up for auction, but what exactly does $25,000 get you? (VIDEO)

Some of the first rifles actually available from Tracking Point are up for Auction now at Gunbroker.com.  But if you’ve been contemplating a $25,000 impulse buy, get on it!  The auctions close today around 4:00 p.m. (eastern).

The rifles are being sold by Darc Ops Armory, a retailer in Oklahoma.  Their proximity to Oklahoma manufacturer Surgeon Rifles allowed them early insight into TrackingPoint’s potential.

“Surgeon told us about TrackingPoint last fall before they began advertising … and we actually per-ordered five of the first units. We’ve ordered more TrackingPoint rifles since then. When we got our reservation cards in October, we had card numbers in the low 30s. When they gave us a few more at SHOT in January 2013, the card numbers were in the 1,350s.”

It is this first batch of rifles that are up for sale now.  Otherwise, if you are not already on the list, you need to apply at Tracking Point.  And, if that 1,350 number is right (and we assume it is significantly lower than it would be now), you will wait a long time for the delivery of your rifle.  Tracking Point is expanding, but they’re still ramping up production.

How easy is the Tracking Point System to use?

At the 2013 SHOT Show, when the Tracking Point rifles made their grand debut, I had the privilege of shooting one.  It is probably as close as I will ever come to a Tracking Point, sadly.  The experience was surreal. 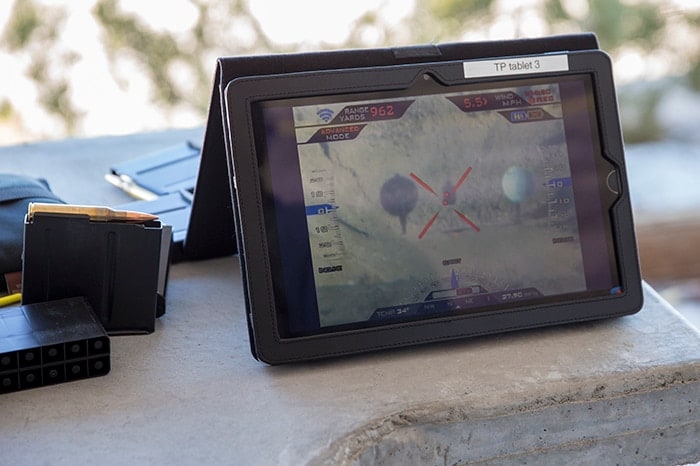 First, let me describe the conditions.  Every year the media is invited out into the desert near Las Vegas for a full day of hands on evaluation of everything new the industry has to offer.  This past January, it was bitterly cold.  When we arrived at the range, it was well below freezing.  It was so cold that the motors in my cameras weren’t working properly.  The winds were kicking on the open stretches of range, somewhere around 30 mph.  Kiosks and tents were being blown over.  Some manufacturers packed up and left before lunch.  But not Tracking Point. 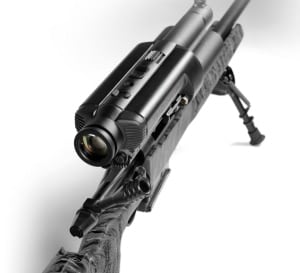 I sat down behind the rifle on a concrete bench and looked through the sizable optical thing on top of the gun.  Inside the scope, a display showed an array of targets at 900 yards.  From where I was sitting, the ground sloped down more than a hundred feet and rose again on the other side.  The dust blowing through the range was easily visible, even on the monitor inside the optic.

Keep in mind that I’d never shot this rifle before.  I didn’t know the caliber of the rifle or the grain weight of the ammunition.  When I’d placed the digital cross-hairs on the target, I pressed a red button just in front of the trigger and a red dot appeared on the target.  I pulled the trigger and moved the cross-hairs back over the red dot.  Within seconds, the gun bucked against my shoulder.  And 900 yards out, the bullet struck the target.  I know, because I got to watch the instant replay on an iPad immediately after.

The potential of the Tracking Point

The technology is empowering.  With all the talk of 1,000 yards or more, the real potential of the rifle may go unnoticed.  That potential is 100 yards.  200 yards.  Tracking Point doesn’t have to be used at 1,000 yards or more.  And it doesn’t have to be used on the big bore hunting guns.  The Tracking Point scope is really big, but it won’t stay that way.  Like all technology, it will get smaller.  And if it does, it will not feel so out of place on a .308, or a .223.

So let’s ask the difficult question

Is the Tracking Point XactSystem worth the price?  Let’s assume you have $25,000 to spend on a gun.  This is not unheard of.  Would you spend it on a TP? 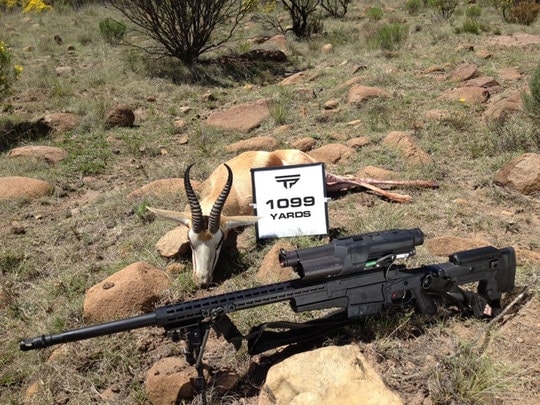 I’ve had to re-frame how I think about the whole system.  It isn’t a gun, it is  philosophy.  You pay $25,000 for the hunt, or the potential hunt.  The gun itself is less important.  It is the assurance that you won’t miss, no matter how far out you shoot.  That will be, for some, worth the price.

On the other end of the argument is the knowledge that this technology is in its infancy.  These are more than working prototypes.  But taking a gun like this on a serious hunt means you expose it to the elements, and to various hazards.  As the gun would be 99 percent useless without the computer aided optics, each hunt is financially risky.  And who are you going to find in the African savannah who might fix anything that goes wrong?

Are the Tracking Point Rifles going to sell?

I don’t know.  The three auctions that close this afternoon are a great barometer.  The super-rich will tool up with TPs and never give it a second thought.  The rest of us, those who drool over the potential, will wait.  Venture X, the Remington/Tracking Point collaboration, may be the answer.  If we can get our hands on modern sporting rifles that won’t miss out to 400 yards, and that sell for $5,000 (which is the goal), we’ll all line up.  And Remington claims that the Venture X guns will be on the market before the fall hunting season of 2013.

At least that’s my take on it.  How much would you be willing to pay for a rifle that won’t miss?