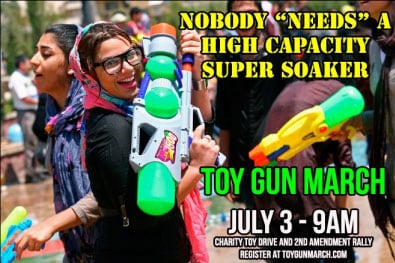 Last week, Austin Petersen, creator of the Toy Gun March, received approval from a board of 30 federal officers to move forward with the “armed” march scheduled for July 3 in Washington, D.C. The march will be at 9 a.m., starting at the Arlington Memorial Bridge and ending at the National Mall. Marshals will also be present to direct traffic and ensure safety.

The event aims to be a peaceful protest of citizens “armed” with toy water guns, stemming from a previously planned armed – with real guns – march originally planned for the Fourth of July in D.C. The plans for that event were met with much resistance from local law enforcement vowing to take action against protesters, resulting in organizer Adam Kokesh eventually canceling the protest. However, that brought about the creation of the Toy Gun March.

According to their mission statement, “Due to the fact that it is currently illegal to carry a loaded firearm into the District of Columbia, we liberty lovers have decided to tweak the nose of big government and show Obama what a clown he is for trying to restrict our natural rights. Join us as we march on DC fully armed with toy guns!” 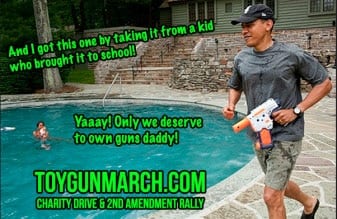 The Toy Gun March is encouraging gun rights advocates to join them in Washington, packing fake pistols with orange tips, water guns, nerf guns or any other peaceful piece of entertainment to make a statement about Second Amendment rights. A 160-gallon water truck will also be at the event so there’s no worry of “ammo” shortages.

As part of the family friendly event, there will also be face painting, outdoor games, food and fellowship, as well as speakers. The march is also doubling as a charity event, collecting new toys for underprivileged children and money to be donated to Toys for Tots. According to the website, the event has already raised 55 percent of their $1,000 goal. Participants are encouraged to bring an unopened toy, book, or board game to donate.

The event is being sponsored by Stonegait Pictures, The Libertarian Republic, Ryan’s Project, and the Ladies of Liberty Alliance. For more information, please check out the Toy Gun March Facebook page or visit their website to make a donation.