Today most new, large-caliber rifles begin at a MSRP around the $500 mark and move up from there. For less than that price, there are several long serving legacy military surplus rifles out there that can offer a whole lot of bang for the buck.

The German arms conglomerate of DWM (Deutsche Waffen und Munitionsfabriken), commonly known as Mauser, was for several decades the Microsoft of military bolt-action rifle companies. The Mauser turn-bolt action was the standard not just for reliability but also for strength across the globe. Not only did they provide millions of GEW98 and Kar98K rifles to the German military in both World Wars, but they also armed many other European and Latin American countries. Besides German made guns, several others including FN in Belgium, Brno in Czechoslovakia, Zastava in Yugoslavia and K. Kale in Turkey made Mauser pattern rifles.

These guns are available in a wide range of calibers from 6.5mm Swedish to 7.62x51mm NATO and 7.92×57 mm IS (8 mm Mauser). Some great deals are still out there on these guns with Turkish Mausers in particular still popping up in the $100 range. Relatively good condition Yugo M48s and Brno made guns are out there for closer to $200-$300 while German guns can be significantly more, especially if they are unaltered and complete with rare markings. Still, if you have a few Benjamin’s laying around not doing anything, investing in a Mauser of almost any sort isn’t a bad idea.

Take a rifle, give it a ten shot capacity, a detachable box magazine, a rugged construction and 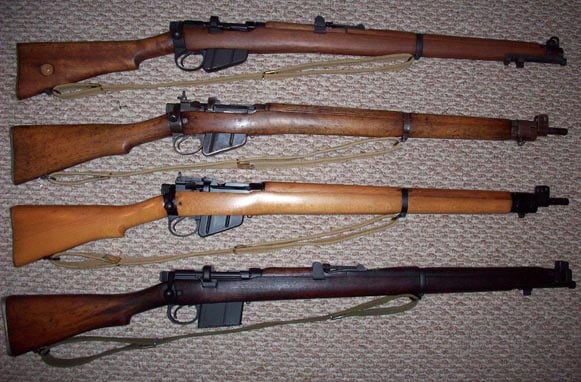 a chamber it for a round that is ballistically similar to the 30.06 and you have the Short Magazine Lee-Enfield.  The Lee bolt-action designs of these guns was so slick and smooth that, when coupled with the large magazine, a skilled shooter could fire up to 30-aimed shots in a single minute. These rifles were standard in the British Army from 1905 to 1957, giving hard service in World Wars, Korea and a host of colonial hotspots. The guns are also accurate, with several variants serving as the basis for sniper rifles that remained in front line service as late as the 1990s.

The rifle’s .303 caliber (7.696x57Rmm) round is both widespread and hard-hitting enough that the loading is made commercially in the United States by Winchester, Remington, Federal and Hornady among others—rare for foreign made military rifles and a testament to the impact of these guns.

With more than 17-million Lee-Enfields made in the 20th century, rifles can still be found for well under $500, with more common No.4 MKI and No.1 MKIII types still out there for around the $200 mark. 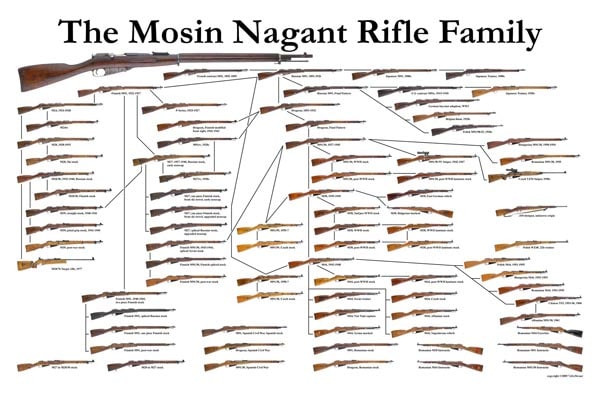 If you are building your own private shooting club and looking for a deal on a crate of old surplus rifles, the Mosin-Nagant could be your way to go. Back in 1891, Russia had a Tsar who kept the only standing million-man standing army in the world. These hardy peasant conscripts needed a foolproof, simple, and strong rifle that could endure the swamps and mud of the Western Ukraine, the harsh deserts of Central Asia and the ice fields of Siberia while still being capable of aimed shots out to 1000-yards. The gun chosen for this was the M91 Mosin-Nagant. Chambered in relatively easy to find 7.62x54R, these guns are capable of remarkable accuracy. 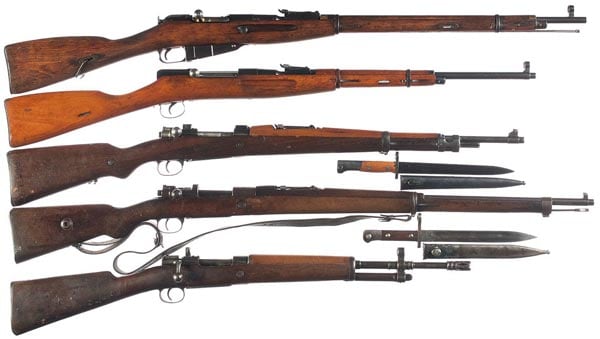 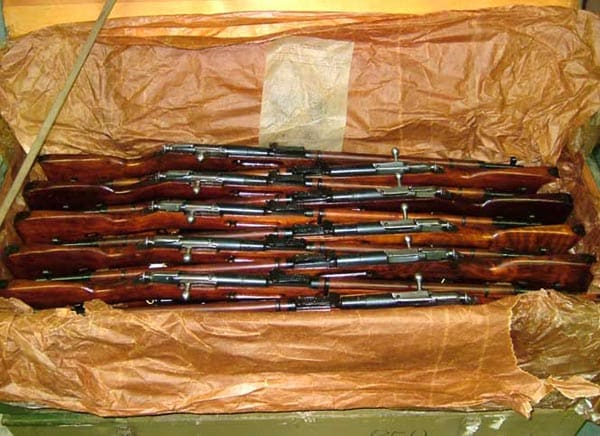 Care of Mosin Nagant M91/30s. Yes, you can still buy these guns by the crate.

The most common variety of these rifles encountered today is the WWII-era M91/30 and these guns can be had all day for around $125. You can even buy these buy the crate Older WWI-era M91’s with their 30-inch long barrel can go for more due to their collectability, especially in the case of French and US-made variants, but are still affordable. These guns can be readily upgraded with aftermarket stocks and magazines such as those by Archangel. Those wanting a shorter rifle for use as a brush gun, homemade scout rifle, or compact truck gun can opt for the M44 or the M59 “Camel Carbine”—just watch out for those fireballs!

The Emperor of Japan in the late 1890s wanted a modern bolt-action rifle for his military that could compete with the best guns of the Western armies. This led to the strongly constructed Arisaka rifle, named after its inventor, Colonel Arisaka Nariakira. These guns in several different types served the Empire throughout both World Wars while surplus weapons would pop up in wars around the Far East for decades after.

Arisaka Type 99, meditating in a garden.

Many WWII Pacific vets brought home souvenir Arisakas in their duffle bag on magic carpet trips home after the war usually destined to become wall hangers or deer guns. The most common variants encountered are the 6.5×50mmSR Type 38 and the 7.7×58mm Type 99. While Arisaka ammo isn’t availble at your local Big Box, it’s still made new by Hornady, Norma, and others.

Many of these guns will have the old imperial chrysanthemum marking removed or damaged, making Arisaka with intact markings as well as so-called ‘last ditch’ guns very valuable with collectors. With that being said, there are thousands of shooter quality rifles here in the country whose less than mint condition, scrubbed mums, and beat up stocks fetch closer to the $150-$200 mark.  That’s a whole lot of history for a tiny bit of scratch.

The Swiss are known for fondue, bank accounts on the down low and high-end watches. What they are also known for are precisely engineered firearms constructed with close tolerances, old world practices, and elegant lines. Even though they are a small country, with a population the size of the state of New Jersey, they put a 500,000-man army in the field to stay free and independent during WWII (well, officially). The rifle they carried was the Karabiner Model 1931 (K31). This breech-loading military rifle used an interesting straight-pull bolt action over a 6-shot detachable magazine.

Just a few years ago, these were being imported and sold for as low as $129, incorrectly called “Schmidt-Rubin” rifles. While this price point is long since gone, you can still lay your hands on one of these Swiss beauties for under $350 in most cases. The 7.5x55mm Swiss round is very similar to the well-known .308 and any purpose that round could be used for is suited for this rifle. Swiss GP11 surplus rounds are available while Hornady and now even Wolf have started to make the loading for these popular surplus snipers. One of the more popular aspects of these rifles is that they often have a handwritten ‘troop tag’ hidden under the butt plate made out with the information of the last Swiss Army trooper to have been issued the gun.

Even kids can shoot a K31