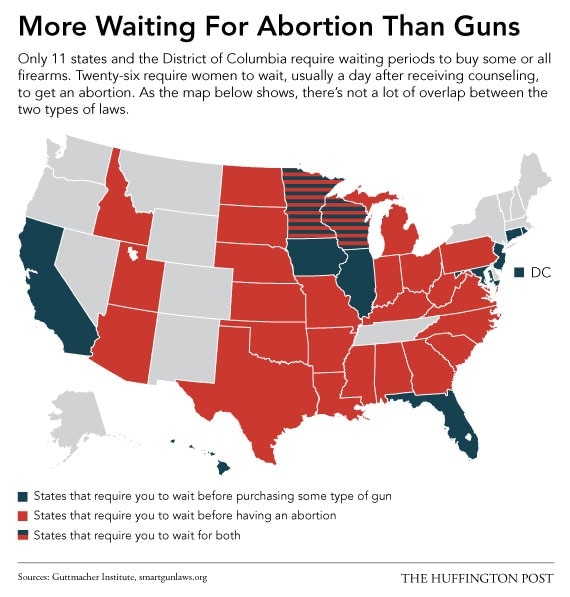 Is it easier to buy a firearm than it is to get an abortion? (Photo credit: Huffington Post)

A recently published article shows that there are more states in the country that require a waiting period to have an abortion than there are waiting periods to purchase firearms.

The waiting periods for abortions, which often include counseling, were established, in part, as a way to help women to become more informed about the decision and to allow time for changing their minds before going through with the life-changing decision.

Some studies claim that the waiting period has no effect on a woman’s decision, but that rather it causes a greater hardship because she is then required to take two days out of her schedule before getting an abortion. In addition, it’s said that the waiting periods cause greater emotional distress for women.

However, another study indicates that waiting periods, help to reduce suicide rates among women seeking abortions by as much as 30 percent.

“It would appear as though waiting periods (and the counseling that usually accompanies them) induce a more reasoned approach to the abortion decision, avoiding rash decisions on the part of the pregnant women. Better decision-making processes presumably lead to fewer regrets later on, lowering the incidence of depression and, ultimately, suicide. These results suggest mandatory waiting periods represent public policies that generate large welfare gains for women faced with unwanted pregnancies,” the study reads.

The study shows that suicides in women who have had abortions are higher than those who have not. Essentially, the study expresses that lives are saved through the waiting periods, but the argument is whether or not it’s the lives of the babies or the lives of the women.

On the other hand, it’s also often argued that waiting periods when purchasing firearms are attributed to potentially saving lives. Senate Majority Leader Harry Reid has used his own father’s 1972 suicide as an example of where a waiting period might have saved his life. While others argue that taking the gun out of a suicidal individual’s hand will not stop that person from being suicidal and certainly not save their life if they intend to harm themselves.

However, it’s also been debated that waiting periods keep firearms out of the hands of law abiding citizens who need immediate protection, such as a woman with a stalker or abusive partner who has threatened to kill her. In such situations, a woman is left with two choices: Abide by the law and take a potentially fatal chance or break the law and obtain a firearm illegally, knowing that she will be adequately protected if needed. Both instances have previously occurred, both having fatal consequences, only the victims vary depending on who has the firearm.