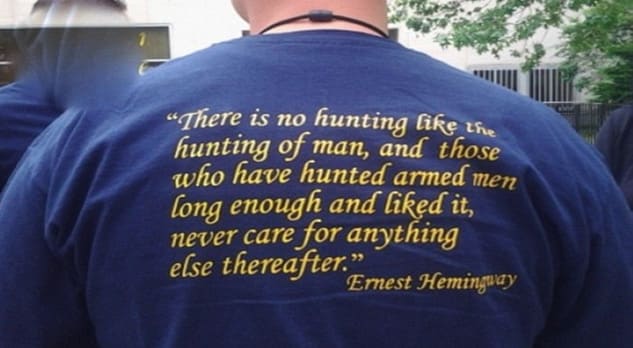 A New York police unit is coming under fire after some of its officers were seen wearing t-shirts with an Ernest Hemingway quote about the thrill of “hunting armed men.”

Apparently two members of the NYPD’s Queens Warrant Squad were pictured outside a courthouse in the New York City borough sporting the controversial shirts. Some observers claim the shirts are offensive because the quote compares human suspects to animals. Other say the shirts are simply inappropriate and likely violate NYPD dress code. 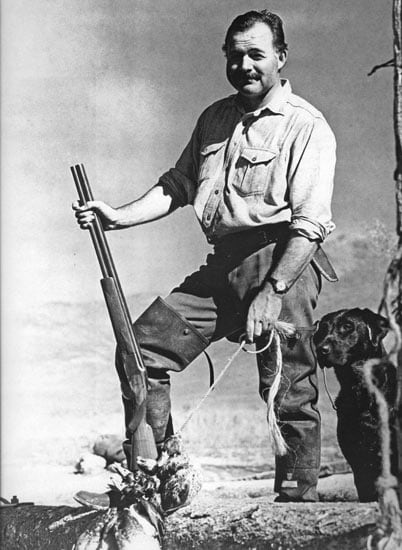 According to the left-wing website, Socialist Worker, an “anonymous public defender” spotted the Warrant Squad coppers and their questionable attire, and promptly snapped a picture for posterity.

The Hemingway quote printed on the back of said shirts comes from his 1936 essay “On the Blue Water” and it reads, “There is no hunting like the hunting of man, and those who have hunted armed men long enough and liked it, never care for anything else thereafter.”

Often, the Warrant Squad faces off with suspects with little to lose and consequently prone to violence. In 2008, two members of the squad were shot and wounded in the Bronx while pursuing a suspect in a double-shooting.

Nevertheless, the Village Voice reported that members of the now-disbanded NYPD Street Crimes Unit, which was responsible for the 1999 shooting of unarmed Guinean immigrant Amadou Diallo, also wore shirts with the same quote.