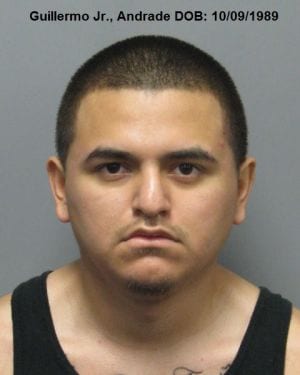 A homeowner in Houston stopped a suspected burglar when he tried to break into his house early Thursday morning.

A local news report stated that the homeowner woke up to the sound of banging just after midnight. He grabbed his handgun and went to see what it was. He discovered Guillermo Andrade trying to kick in the back door.

He fired several shots at Andrade, hitting him twice. He then crawled into the front yard and when the homeowner followed him, Andrade – even with two hunshot wounds – became physically violent toward the homeowner, who held him down until deputies arrived.

Andrade, who also recently served time for burglary, was arrested and taken to a local hospital where he was treated for the non-life threatening gunshot wounds.

During all of the commotion of the attempted break-in, when the homeowner fired the shots, one bullet missed the suspect and traveled to the home behind the house which was broken into.

A shoeless and shot burglary suspect gets aid from a deputy. (Photo credit: Click 2 Houston)

A 14-year-old girl who was present at the time was so startled by the passing bullet that she had a seizure. She was also taken to a local hospital, where she was treated and released. The girl’s mother described the event as scary, but said she’s doing fine now.

Neighbors told an ABC affiliate that they support the actions of the homeowner. One neighbor, John Antell, said, “The reason I bought my gun is because I hear about things like this. It’s something very serious,” and added, “It could happen to me tomorrow.” Antell, who has lived in the neighborhood for more than 40 years, said that he doesn’t like knowing that houses are being broken into in the area.

The homeowner was not injured, and at this point is not expected to face any charges, but that decision will ultimately be up to a Grand Jury.