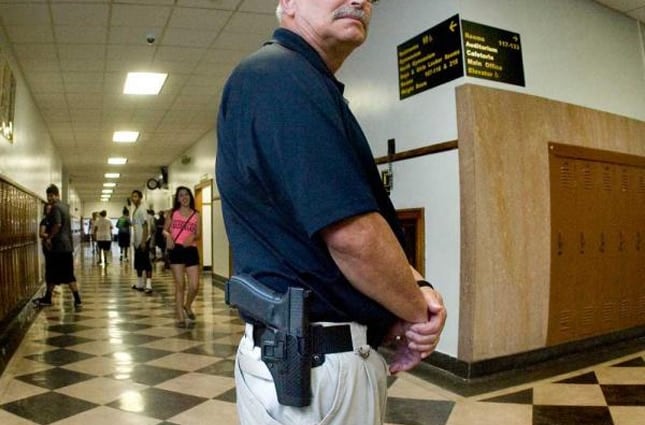 EMC Insurance Companies, the largest insurer of schools in the state of Kansas, recently announced that it would not be willing to provide policies to schools which allow their teachers or other staff, to carry concealed firearms on school property. The only exception would be for police officers.

The Topeka Capital-Journal broke the story after the company sent out a letter last month to school districts in the state declaring that their decision is “simply to protect the financial security of our company.”

EMC’s resident vice president, Bernie Zalaznik said, “We understand that school districts have every right to decide which way they want to go, but we have to make the decision based on what we perceive to be our best financial interest.”

Apparently the company perceives those who complete the process of obtaining a concealed carry permit, which includes a firearms safety class and complete background check, not qualified and too much of a financial risk.

The company’s announcement comes just weeks before a new state law is set to go into effect, which will allow teachers and other faculty to possess firearms on school property. 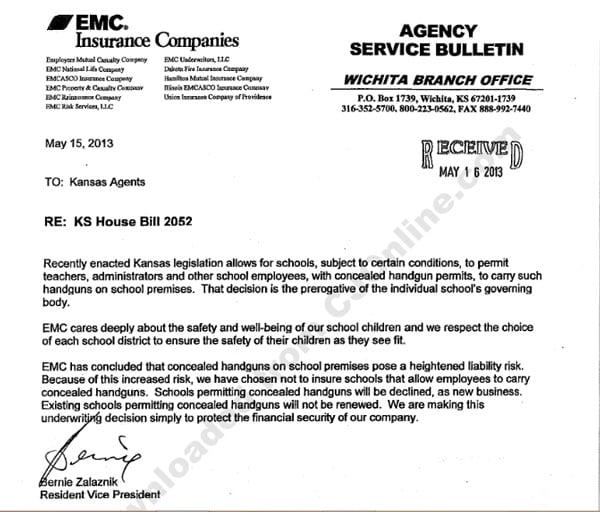 The letter from EMC Insurance Company stating that it will not cover districts with gun toting teachers. (Click to enlarge)

Under the new law, each school district will have the option of choosing whether or not to allow armed staff in their schools. And while most of the bigger school districts, which either already have armed officers or a sizable police department nearby, are not interested in implementing the new law. However, the schools that have shown interest are the smaller districts, which do not generally have the resources for officers in the schools. These are also the more rural areas where law enforcement is not always adequate.

EMC currently insures an overwhelming 90 percent of Kansas schools. While there are two other carriers in the state, Wright Specialty Insurance and Continental Western Group, provide insurance to school districts, both of these companies have also expressed that they are not interested in covering such liabilities either.