Taliban Offer to Trade US Soldier for Gitmo Detainees

The Taliban have offered to exchange an American POW for five of their most senior operatives held at Guantanamo Bay.

Although reports vary regarding U.S. Army Sgt. Bowe Bergdahl’s disappearance, he is the only known American soldier to be held captive from the Afghan war. Captured in June 2009, Bergdahl, 27, is thought to be in good condition. 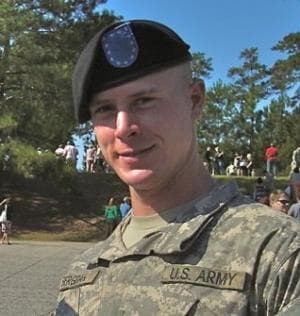 The recent proposal was made by senior Taliban spokesman Shaheen Suhail via an interview with The Associated Press. But the idea of releasing high-level Taliban prisoners for Bergdahl remains controversial. U.S. negotiators fear they will simply return to the battlefield.

Nevertheless, the exchange is the first item on the Taliban’s agenda in order for peace peace talks to begin.

“First has to be the release of detainees,” said Suhail on Thursday when asked about Bergdahl. “Yes. It would be an exchange. Then step by step, we want to build bridges of confidence to go forward.”

The Obama administration remains cautious about the proposal.

“We’ve been very clear on our feelings about Sgt. Bergdahl and the need for him to be released,” State Department spokeswoman Jen Psaki said. “We have not made a decision to … transfer any Taliban detainees from Guantanamo Bay, but we anticipate, as I’ve said, that the Taliban will all raise this issue.”

According to the Taliban proposition, Bergdahl would be exchanged for the following individuals:

Mohammad Fazl, a former Taliban chief of army staff and the deputy minister of defense.

Abdul Haq Wasiq, former Taliban deputy minister of intelligence. He was in direct contact with supreme leader Mullah Mohammed Omar during the Taliban rule, according to military documents.

Mullah Norullah Nuri, who has been described as one of the most significant former Taliban officials held at Guantanamo. He was a senior Taliban commander in Mazar-e-Sharif and previously was a Taliban governor in two provinces in northern Afghanistan.

Khairullah Khairkhwa, a former Taliban minister of the interior and military commander. According to military documents, he had direct ties to Mullah Omar and Osama bin Laden and was also a friend of Karzai.

Mohammed Nabi, former chief of security for the Taliban in Qalat, the capital of the southern province of Zabul.