The Pedersen Device: The WWI superweapon that (almost) won the war 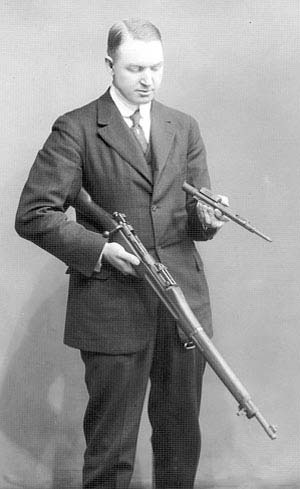 Mr. Pedersen with his device and a Springfield 1903.

When America found herself in the brutal trench warfare that was the First World War, she needed lots of weapons—fast. One unsung inventor came up with a secret weapon that turned the standard bolt action infantry rifle into a fire-breathing dragon. This man was John Pedersen and he (almost) helped win WWI.

Who was Pedersen anyway?

John Moses Browning is said to have told Maj. Gen. Julian S. Hatcher of U.S. Army Ordnance that Pedersen “was the greatest gun designer in the world”, yet too many gun nerds have never even heard the name. Pedersen was a behind-the-scenes type of engineer who, in some four decades in the gun industry was awarded over 70 patents. He designed most of Remington’s pre-WWII 20th century product line. Among these were the Model 51 pistol and the Model 12 rifle. He worked with Browning on a collaboration that became the Remington Model 17 shotgun—from which both the Browning BPS and the Ithaca 37 are descended.

In 1917, with the US entering the morass that was World War One, Pedersen tried to help give Uncle Sam a little something extra to take with him over there. 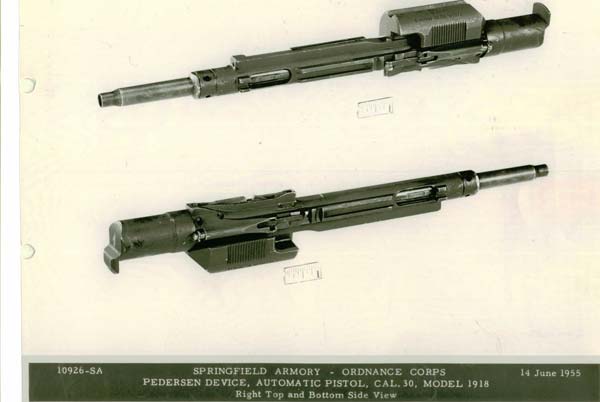 The US Army’s primary service rifle, the famous M1903 Springfield, was a bolt action 30.06 based on the German Mauser action. This long-range beauty could fire up to up to 15 rounds per minute. Pedersen knew that the Army would never abandon this cherished rifle with the war on, so he engineered an aftermarket kit that could be placed into a (gently) modified Springfield to increase its rate of fire exponentially.

His device was a very simple top loading, blowback-operated pistol without a grip. Its barrel was the exact size, shape, and length of the standard .30-06 M1906 cartridge case. All the soldier had to do was pullout the regular turnbolt of his Springfield and any .30-06 ammo, insert the Pedersen Device, attach the device’s 40-round magazine, and let her rip. The device used the host rifle’s trigger group, sights, barrel, and stock. The device would cycle new rounds, and eject spent cases through a small port cut in the side of the rifle. Other modifications to the rifle were to the sear, magazine cut off, and trigger to allow the regular bolt or the Pedersen device to be used interchangeably. In tests a trained infantryman could rip off two full magazines in less than a minute—a 500% increase in the Springfield’s rate of fire.

Pedersen device installed on a 1903 rifle with magazine and box of rounds. 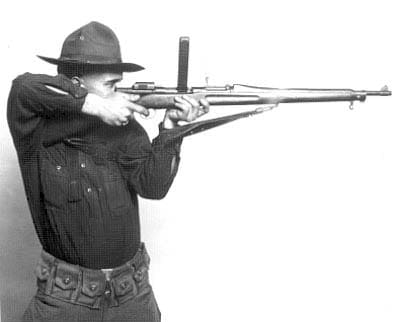 The Petersen device installed on a Springfield 1903. Note how high the forty round magazine stuck up even when angled at 45 degrees to allow the use of the sights.

To accommodate the device’s short action (it had to fit completely in the space occupied by the Springfield’s original bolt), it fired a short .30 caliber pistol sized round. This 7.62x20mm round, a cross between .32 ACP and the WWII-era .30 Carbine loads, held a 80-grain bullet over 3.5 grains of bull’s-eye powder which gave a blistering 1300fps out of a rifle barrel.

This allowed the Pedersen device rounds, although pipsqueak in size, to still be lethal and accurate enough to reach out to 300 yards. Overall, the device added 1.75 pounds to the weight of the standard Springfield rifle, but, best of all, all the all the infantryman in the field had to do to convert back over to .30.06 was pull out the device and insert the regular bolt and ammo. Two guns with the weight of one! 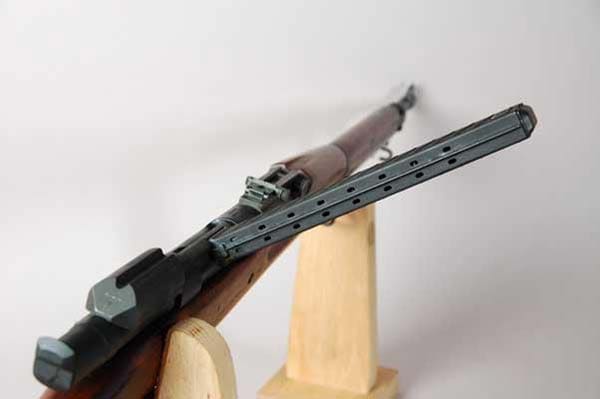 M1903 Mk 1 with Pedersen installed. Note the angle of the magazine.

Pedersen arranged for secret testing of the device for the Army in October 1917.  It was an instant hit. 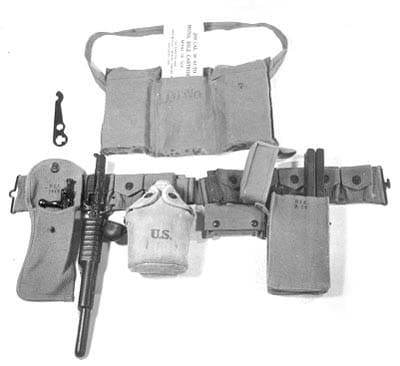 The standard Infantry kit. The large pouches held Pedersen magazines and the metal case by the canteen held the device itself.

Type classified as “US Automatic Pistol, Caliber .30, Model of 1918” (well, it was technically a pistol), the Pedersen Device was ordered into mass production. Some 100,000 of the Mk.I version, for the Springfield 1903, were ordered for starters. Pedersen was asked to redesign follow-on Mk.II devices to fit the M1917 Enfield rifle as well as an Mk.III device to fit the Russian Mosin Nagant of which thousands were on hand. In all it was envisioned that no less than 500,000 of Mr. Pedersen’s conversion kits and at least 65-million rounds of ammunition would be made available by 1919 for the Allied offensive into Imperial Germany.

The plan was to issue frontline soldiers a Springfield or Enfield rifle, modified to accept a Pedersen Device, 100 rounds of .30-06, and the device itself with another 400 rounds of ammo for it. To speed up reloading as much as possible, each GI would be issued 10 magazines held in a pair of five-cell pouches. The device’s ammunition would be boxed in 40-round magazines. With Doughboys toting an impressive amount of firepower, supported by the new Browning BAR and Mr. Thompson’s submachine gun, the war would be over (over there) in a snap—the only problem was, it was over. 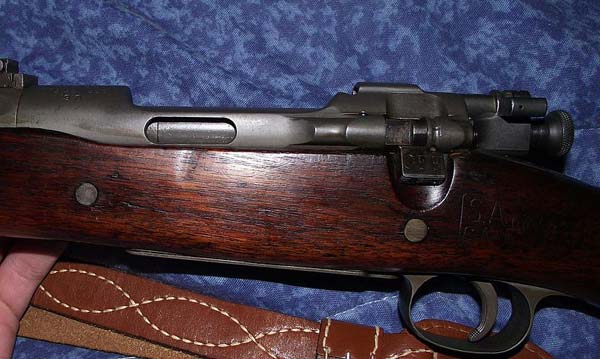 Springfield Mark I. Note the cut out of the receiver to accept the Pedersen device. 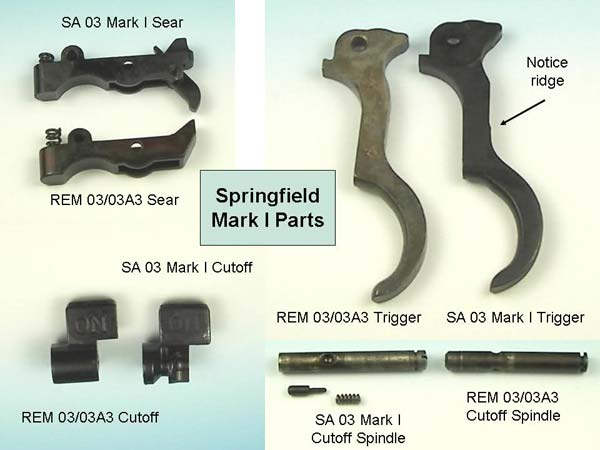 Peace broke out on November 11, 1918, before the Pedersen ever reached the front lines in France. With the reason for its production evaporating like a cloud of mustard gas, Remington made just 65,000 Pedersen Mk I devices before the rest of the line was canceled. The MkII and III versions for the Enfield and Mosin-Nagant never left the design phase while the Army never used the existing devices in combat, putting them straight into storage.

An estimated 101,775 Springfield rifles were modified (and dubbed ‘Mark I’) to take these devices but none ever used one in battle. In 1931, the stored devices including the ammunition and stockpile of magazines were declared surplus but since the whole project had been strictly classified so that the Kaiser’s storm troopers would be shocked at the Pedersen’s debut on the battlefield, they were destroyed by fire rather than sold as scrap.

Nobody has a clue how many Pedersen devices are left out there. The few remnants out there were tool room pieces, testing units, or items that just grew feet and walked off (not condoned but it happens) and estimates range from 60-100 pieces. 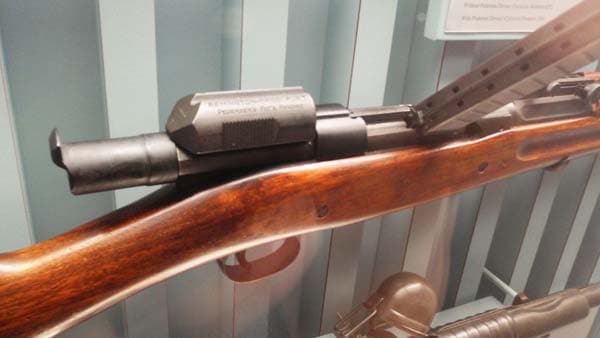 Pedersen device installed on a Mark I Springfield 1903 with magazine at the National Firearms Museum.

As is the case with military collectables that aren’t supposed to even exist, they are crazy sought after: when they occasionally come up at auction they go for anywhere between $20-$50K. They will have a very distinctive “U.S.A. 1918-MARK I” and “REMINGTON-BRIDGEPORT” roll mark. The bullets, magazines, carrying cases and manuals for these are equally rare. It’s not uncommon to find surviving magazines with signs of heat scaling, indicative of being exhumed from the ash pile after their supposed demise in bonfires.

If you stumble across one of these rare birds, make sure to check for Remington roll marks. 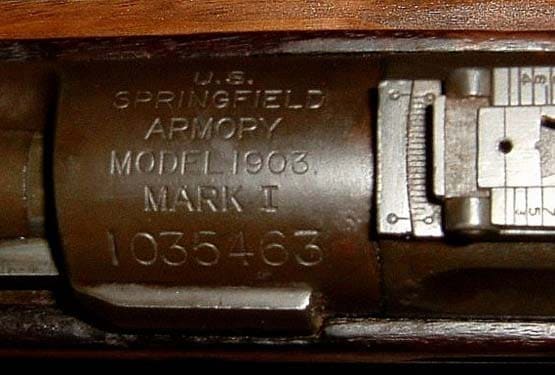 While a few replicas are also out there, they are for the most part non-working dummies made up by reenactors to match to their surviving Mark I Springfield rifles. Speaking of which, there are several thousand of those converted old 1903s out there, but they were converted in the 1930s back to the original standard and the only reminder they have of the Pedersen affair is the cutout in the receiver and the ‘Mark I’ rollmark by the breech.

No serial number list is out there for these but they were all made in 1918-1919 and are in the 1,000,000 range if that helps. The CMP occasionally comes across Mark I Springfields turned in from veteran’s organizations so keep your eye on their website. Perhaps a forgotten case of old Mr. P’s funky ‘pistols’ will be found in a forgotten Army warehouse and then make their way to Camp Perry.

Other than that, hold your breath. So the next time you are poking around a gun show, pawnshop junk bin, or roadside yard sale and see a weird gun-like tube on it that looks like some of these pictures—grab it.

Or at least give Guns.com a call and tell us where it is.