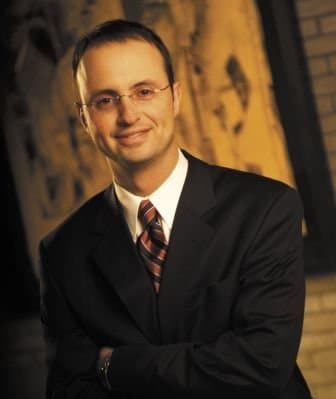 Rockford Mayor Larry Morrissey, who quite possibly borrowed that suit from his dad, looks great for 43. (Photo credit: Twitter)

The mayor of Rockford, Illinois, is defecting from Mayors Against Illegal Guns, the pro-gun control coalition of city mayors from around the country that was co-founded by New York City Mayor Michael Bloomberg.

Well, according to Rockford Mayor Larry Morrissey the group is guilty of false advertising and has not lived up to its name. That is, instead of targeting criminals who are unlawfully possessing firearms, the group has primarily focused on efforts to (a) take firearms away from law-abiding citizens and (b) make it more difficult for individuals to exercise their Second Amendment rights.

“I’ve dropped out of a group called Mayors Against Illegal Guns (MAIG),” Morrissey announced to a crowd of about 200 people at a local Tea Party rally on Saturday. “The reason why I joined the group in the first place is because I took the name for what it said. Against ‘Illegal’ guns.”

“The challenge that we see day in and day out in the city of Rockford is not dealing primarily with assault weapons or machine guns, automatic weapons. It’s dealing with a typical handgun. All of those typical weapons are usually in the hands of people who are prohibited from having them,” Morrissey, who is a registered Independent, continued.

“As the original mission swayed, that’s when I decided that it was no longer in line with my beliefs. … So that’s why I dropped out,” Morrissey explained. “The focus should not be against law-abiding citizens. We should be focusing our enforcement on folks who have no right to carry a gun, concealed or otherwise.”

In short, Morrissey has seen the light. He has recognized that much of what MAIG aggressively lobbies for, e.g. a ban on modern sporting rifles, a ban on standard-capacity magazines, a law that would criminalize the transfer of firearms between private parties, will only burden responsible gun owners while doing virtually nothing to curb gun-related crime or prevent mass shootings like the one at Sandy Hook Elementary School in Newtown, Connecticut.

Morrissey’s conversion from the dark side to the side of common sense and reason and of upholding and preserving Constitutionally protected rights did not only include a public denouncement of MAIG, but also a full-fledged embracement of concealed carry.

“Any doubt that I might have had in my opinions about concealed carry when I first came into office changed quickly as I became an elected official and became very familiar with the types of crimes we’re dealing with,” Morrissey said. “The focus should not be against law-abiding citizens.”

Morrissey further explained that he supports concealed carry because in the wake of several death threats since he’s held public office he’s realized that the right to defend oneself and one’s family is critically important as the police won’t always be there when one needs them, i.e. when seconds count, law enforcement may be minutes away.

“Personally as well, I’ve had three threats that I’ve had to deal with since I got elected,” he said. “None of which turned out to be any major event, but, you know, once you get a death threat and you realize even with the support of the Rockford Police Department, I just know with myself, especially now with a very young family, I don’t want to put my family’s life at risk, I don’t want to put my own life at risk, in a way that I could otherwise prevent. If I can protect myself, I’m going to do it.”

Gun owners should view this as encouraging news and put pressure on their local mayors and lawmakers to follow Morrissey’s lead. Currently, MAIG is spending millions of dollars trying to cow politicians into supporting tougher restrictions on gun ownership. While the majority of their efforts have failed to achieve their desired goal at the federal level (universal background checks, the ban on magazines and so-called ‘assault’ weapons all failed to get the 60 votes needed to clear the Senate), MAIG has been instrumental in getting state legislators in New York, Connecticut, Colorado and Maryland to approve comprehensive gun control reform.