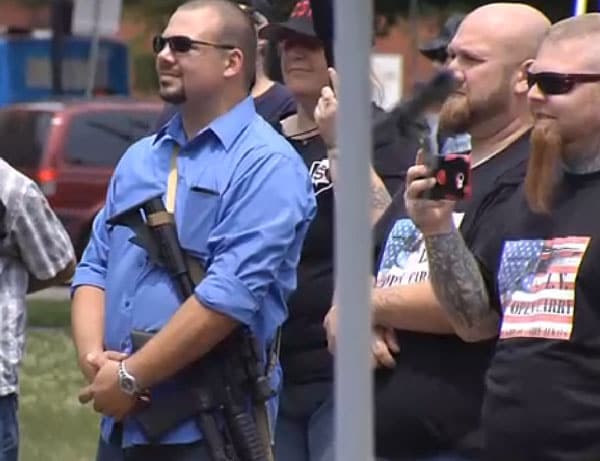 Defying both city ordnance and police enforcement, gun rights activists rallied together to make a statement on Saturday in Erie, Pennsylvania, to protest certain restrictions on open carry.

Go Erie reported that the gathering included about 80 people, 15 to 20 of which were openly carrying firearms. Open carry is currently prohibited in public parks in Erie and as a result, the event also brought out the local police department, with officers issuing citations for those that they suspected were open carrying.

Apparently, instead of asking for ID’s of those who were carrying firearms and then writing tickets, the officers opted for the route of writing down license plate numbers from parked vehicles.

“They’ve been going around writing down everyone’s license plate number … they said they’re going to be querying the JNet (Justice Network) system to basically try and do facial recognition … and then proceed from there in issuing citations,” Joshua Prince, a lawyer for Justin Dillon, the founder of Open Carry PA, explained to local news reporters.

This tactic didn’t go over so well with some in attendance, who recorded video of the officers taking the numbers down, which one speaker, Pastor George Cook, described as “Mayor Sinnott’s private Gestapo force.”

One person asked the officers, “Without any reasonable suspicion you can run license plates?” to which he received no legitimate answer. One officer finally stated, “Just following orders,” only adding fuel to the fire and invoking the response from one rally-goer, “Yeah, it didn’t work at Nuremburg, either.” Another voice could be heard saying, “This is what a police state looks like.”

The citations, which were supposed to be mailed following the rally, came with a fine of $100 to $300 and up to 90 days in jail for failure to pay the fees. Some were willing to pay the fine in order to make a statement, others not so much.

“I’ll take a citation, because I don’t feel (the law) is right. Why should my rights stop when I walk into a park?” Dillon said.

Another gun rights advocate, Dylan Brown, although he believes in the right to open carry anywhere, he didn’t take the risk. “I just have my AK-74 magazines and just a holster, I didn’t carry because I’m a law abiding citizen, I like to follow the rules like everybody else.”

“We are American patriots, and we are a force to be reckoned with,” Cook told fellow attendants during a speech at the rally. He said he doesn’t agree with the city’s restrictive ordinance. “First, our constitution … says that the right of people to bear arms in defense of themselves and the state shall not be questioned. The preemption clause in our state law … says that local towns like Erie can’t make other laws concerning firearms,” he explained.

Event organizers even filed an injunction with the city in reference to the ordinance prohibiting open carry in the park, but it was denied.

Prince said that he hopes to defend those who were issued citations for choosing to carry firearms to the rally.

“I filed an emergency appeal to the Pennsylvania Supreme Court that has now issued an order to the city to file an answer by June 28,” he said. “There’s all types of towns and cities that have actually dismissed their ordinances just for a simple letter from an attorney or the DA saying ‘Hey we’re not gonna enforce it.’ Why can’t I get that same support here? I’m hoping and I’m sure that the Supreme Court may probably go on our side,” he explained.

Dillon said that he felt the police presence had a negative effect on the event, but that he was still happy to see those who were in attendance show up.