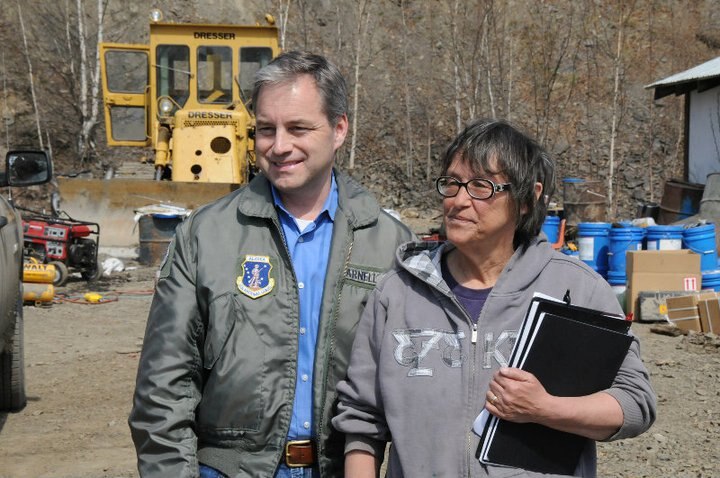 Unlike most of us, Alaska Gov. Sean Parnell doesn’t have to buy a sweet flight jacket from an Army/Navy store. Here he is showing it off to his constituents at Crooked Creek, Alaska. (Photo credit: Facebook)

“In Alaska, our way of life depends on our ability to carry firearms to defend ourselves, provide for our families, and live freely,” Parnell said at a press conference at the Matanuska Valley Sportsmen’s Shooting Range.

“As the federal administration continues its efforts to restrict our rights, these bills will ensure Alaskans’ Second Amendment rights are better protected,” he continued. “I appreciate all of the hard work by legislators who sponsored and supported these bills aimed at protecting law-abiding Alaskans.”

Of the bills signed into law, perhaps the most controversial is the ‘Stand Your Ground’ legislation. Mirrored after the Florida self-defense law that bears the same name, the Alaska ‘SYG’ law expands the conditions under which a law-abiding gun owner can use force, including deadly force, to protect himself/herself, his/her family and his/her property.

Before the passage of House Bill 24 — the SYG law — Alaskans had a duty to retreat from a confrontation with an attacker if they could do so safely. Now, however, as long as the individual is in a place where he/she has a lawful right to be, he/she can use deadly force if he/she reasonably believes that his/her life is in danger.

“And we’re talking about a law-abiding citizen’s right to stand his or her ground,” he emphasized.

With the Trayvon Martin case underway, many believe that this law is also on trial. One will recall that George Zimmerman, a neighborhood watch volunteer, shot and killed 17-year-old Martin in a gated community in Sanford, Florida, after the two got into a scuffle.

Zimmerman, who is facing second degree murder charges, is claiming that he acted in self-defense under the law, though whether Zimmerman’s defense attorneys invoke the specifics of Florida’s SYG during the trial or whether they use simple self-defense under Florida common law is not yet clear.

Nevertheless, Senate President Charlie Huggins, who also attended the signing, was asked about the controversial SYG law and the Trayvon Martin case.

“Trayvon Martin was not a clean cut young man. He had a history. So I’m not so sure that there wasn’t some mischief that he had proved himself capable of and may have been gettin’ ready to take place,” Huggins told Alaska Public Media.

“But I wasn’t there. But what happened with Trayvon Martin has no bearing, in my estimation, on what we’re doing in Alaska,” Huggins concluded.

Here is a list of the other bills Parnell penned last Thursday, courtesy of the governor’s website:

Speaker Mike Chenault’s legislation strengthens the Alaska Firearms Freedom Act. House Bill 69 prohibits the use of State assets in the implementation of federal laws that infringe on the rights of Alaskans to keep and bear arms, as well as federal laws that deny a person federal or State constitutional due process rights.

House Bill 83, sponsored by Representative Wes Keller, clarifies that a federal statute, regulation or presidential executive order that is not properly adopted, or is unconstitutional, does not preempt State law.

House Bill 33, sponsored by Representative Neuman, clarifies that one-handed hunting and utility knives do not qualify as switchblades and as such, are legally owned. Some jurisdictions have restricted the types of knives individuals may carry. In some instances, common pocket knives have been defined as switchblades or gravity knives.

Senate Joint Resolution 2, sponsored by Senator Dyson, commends Governor Parnell for protecting the state from federal overreach and interference with Alaska’s right to manage its resources and promote economic prosperity.

From this journalist’s humble perspective, Gov. Parnell and the state Legislature deserve a big round of applause for securing the rights of responsible gun owners to not only keep and bear arms but for expanding self-defense rights outside the home front.

And while it’s unclear whether some of these state preemption laws mentioned above would hold up in a federal court — the Supremacy Clause in the U.S. Constitution states that federal law is the “supreme law of the land” and thus supersedes state law — what is clear is the message Alaska lawmakers are sending to the White House, i.e. we’re going to fight tooth and nail to protect our citizens from onerous federal gun control.

As the governor noted, “The resolutions, the legislation we sign today are our declaration that we are strong supporters here in the last frontier of our second amendment.”