Ever got in a fight with a Finn? Well if you never have let me tell you now, save your time and your health. Zero to sixty is how Finnish fury goes in battle and in 1939, the mighty Soviet Red Army found this out first hand. The weapon of choice for the hearty Finnish troopers? The Suomi. 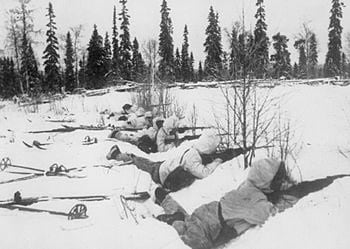 The Finns stood knowingly outnumbered against Russia after WWI.

Finland fought for its independence from the corpse of Imperial Russia at the end of World War 1 in 1918. The Russians (even today) have always fostered the notion that being part of their country, willingly or not, is kind of like being in the mob—once you are in you can never really get out. With that in mind, Finnish military planners knew that it was only a matter of time before the Russians indeed came back with an offer they couldn’t refuse so in the early 1920s, the Finnish arsenal at Tikka began work on a prototype small machine gun to give the vastly outnumbered Finn infantry a leg up in a potential invasion.

Design of the Suomi

Aimo Lahti, a well-respected 25-year old firearms whizzkid first started work on the Suomi-konepistooli (Finn for or “Finland-Submachine gun”) in 1921. While a few pistol caliber handheld submachine guns had come from World War 1, few had seen any combat. Lahti and his team looked at Hugo Schmeisser’s German-built Bergmann M18 for reference and learned from that gun’s mistakes. That very year prototype Suomis were sent to the field for testing. With a decade of R&D backed up from extensive field trials in the Arctic Circle (much of the country lies above it), the final design was put into service as the Suomi KP31. 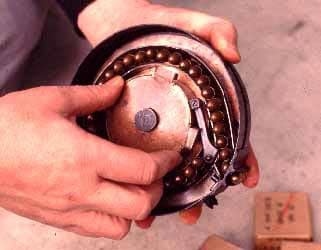 The gun was a simple blockback design that used a spring-loaded bolt to shorten the action. A 12.4-inch rifled barrel coupled with a one-piece wooden stock gave the gun an overall length of 34-inches. With thick milled steel parts instead of stampings and wood instead of plastics, the gun was heavy at just over ten pounds unloaded. This bulk helped mute the felt recoil of the gun’s 9x19mm parabellum round, especially when ripping them off at 750 rounds per minute from an open bolt. A slotted heat shield and a quick change barrel option, almost unheard of on anything but a heavy machine gun, kept overheating down.

With a high cyclic rate of fire, the Suomi craved a diet of 9-milly brass and Lahti’s team designed at least three different magazines for it. Standard was a 36-round double stack stick magazine. Optional super high caps included a 50-round four stack coffin mag or a 71-round drum. 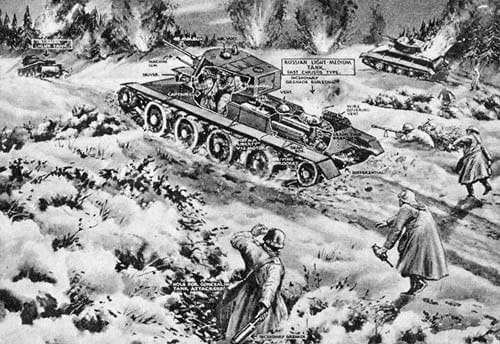 Finns in pursuit of Russian tanks with Molotov cocktails.

In 1939, Stalin demanded unrealistic territorial concessions from Finland as a prelude to war. When the country refused, nearly one million Soviet troops massed at the border and invaded their tiny neighbor. With the Finns vastly outnumbered, the outcome in what was called the Winter War should have been a forgone conclusion but nobody told that to the Finns, who sent out small, well trained raiding parties on skis armed with Suomis, Mosin rifles, and Molotov cocktails.

A popular expression in Finland at the time went something to the effect of, “There are so many Russians and our country is so small.  Where will we bury them all?” This saying would prove not so far from the truth, with the Finns inflicting some 323,000 total casualties on the invaders in 103 days of combat before hostilities were forced to a standstill. In the end, Finland accepted a peace treaty and lost some territory that the Soviets occupied, but remained independent. 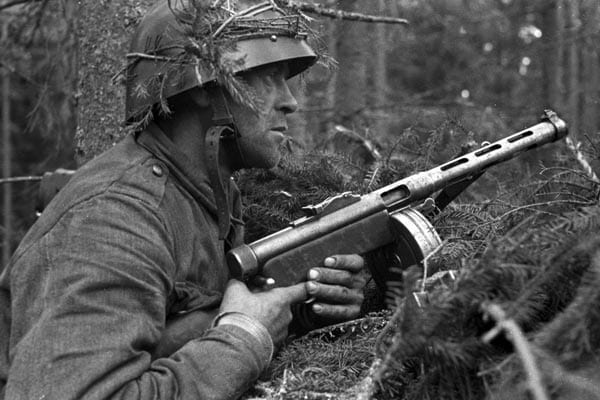 Suomi submachine gun, seeing service in the woods of Finland.

Meanwhile the Suomi became a legend in its time. It is entirely conceivable that the Finns would have been less successful, and likely lost the Winter War without this weapon. Its design was so 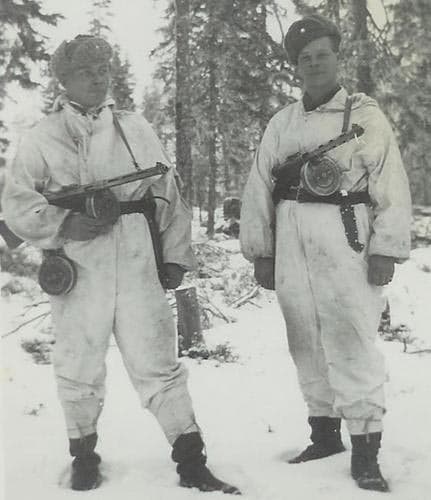 forward thinking that it helped serve as the foster parent for legions of subgun designs after it. The 71-round drum of the Soviet PPSH-41 was directly reverse engineered from Suomi. It’s thought that the spring-loaded bolt of the Suomi was the evolutionary bridge between WWII-era subguns like the Schmeisser to the telescoping bolts of the Cz23 and UZI designs.

Sweden produced thousands of their own Suomis as the M37 chambered first in 9x20mm Browning Long, then in 9×19. It was also license built in Denmark and Switzerland. Finnish allies in WWII (known as the Continuation War in Finland), including Germany, Bulgaria and others bought whatever the Finns could spare.

Lahti by the way went on to design more than fifty other weapons ranging from a very successful pistol that carries his name all the way up to anti-tank artillery. He died in 1970 as a retired major general.

With its wooden stock, durable construction, and heavy (15.5-pounds with a loaded 71-rounder) profile, the Suomi was a gun built to withstand the ravages of time. Both the Finns and the Swedes kept them around for some 50 odd-years, finally retiring them for good in 1998. Since the fall of the Soviet Union and the resulting great European disarmament, thousands of Suomis were discarded on the surplus market and these have come to the US in two forms: parts kits and semi-auto rebuilds.

Parts kits right now are exceedingly easy to get with prices as low as $79. When building them to a dummy receiver they make a beautiful and historical piece. When making a semi-auto on a new working receiver be sure to follow NFA rules. Magazines used to be very cheap (like under $20) but supplies of the 36-round stick mags are drying up after SW76/760 owners found out they could be used on their guns as well.

Semi-auto conversion models built in the US from torched Swedish and Finnish guns are also common. Using a new receiver that fires from a closed bolt and a longer barrel to ensure it’s not a SBR, these run about $450. Seems like the only complaint that new owners have about these (besides being heavy) is that they keep having to make trips to the store to buy more ammo.

Grab a few if you have a bunch of 9mm that you don’t know what to do with. Or if the Russians ever start massing at your border.