It’s not very often that one witnesses infighting within the gun community, but the National Rifle Association is embroiled in a battle with fellow pro-gun organizations, the National Association for Gun Rights (NAGR) and Gun Owners of America (GOA), over a controversial Florida Bill — House Bill 1355 — that would prohibit individuals who voluntarily seek mental health treatment upon being deemed a ‘threat to themselves or others’ from purchasing a firearm.

Under current law, only people who are involuntarily committed are banned from buying a gun, those who willingly seek treatment after being detained as part of the state’s Baker Act — which allows judges, law enforcement, physicians and mental health professionals to call for the involuntary examination of an individual — can still purchase a firearm.

Critics of HB 1355 argue that the bill skirts due process and has the potential to erode the Second Amendment rights of law-abiding citizens.

The legislation is “taking away people’s rights without due process,” Michael Hammond, a lawyer for GOA, told the Miami Herald. “You don’t lose your constitutional rights because a shrink says I have to report some guy because if I don’t, and he shoots up a school, then I’m going to be in a whole lot of trouble.”

HB 1355, which cleared the state Legislature almost unanimously, i.e., there was only one dissenting vote among 160 House and Senate members, is now awaiting the signature of Florida Gov. Rick Scott who has until July 2 to sign the bill.

Due to the outreach efforts of GOA and NAGR, word has spread quickly about the bill and, according to the Herald-Tribune, approximately 20,000 gun owners and gun rights advocates have contacted the governor over the past few weeks urging him to veto the bill.

“Please veto HB 1355 and stand up for our rights to keep and bear arms,” Ronald Roosa, a Citrus County man, told Scott in an email last week, as the H-T reported.

“Remember, Governor Scott, you are up for re-election,” wrote Betty and Elmer Henry of Lake County. “The many gun owners in Florida do not agree with this bill and will vote accordingly.” 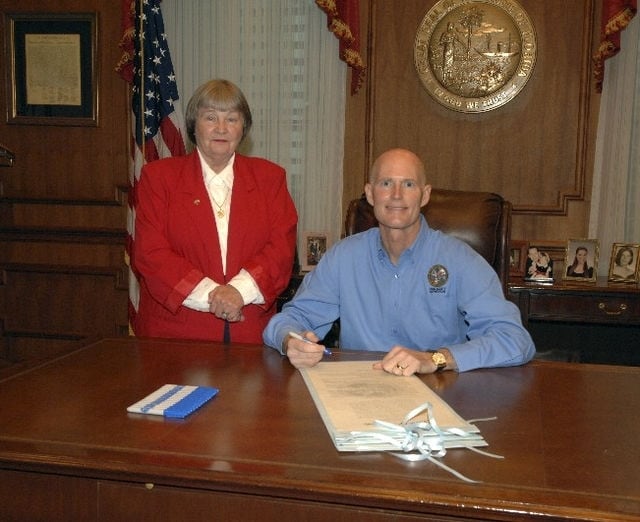 In response to this grassroots activism in opposition to this NRA-backed bill, Marion Hammer, the NRA’s point person in the Sunshine State, has lashed out against GOA and NAGR and gone to great lengths to educate gun owners about the bill in an attempt to refute what she called “patently false” criticism and information.

“These are not organizations that are here on the ground, working the issue,” said Hammer in an interview with the Miami Herald.  “They are full of disinformation designed to inflame and upset people and help them raise money.”

Hammer rejected the notion that the bill poses a risk to responsible gun owners.

“It’s not anti-Second Amendment,” Hammer said. “It closes a gap in the system that prevents dangerous people with mental illnesses from being able to buy guns until they’ve had treatment and are cured.”

So, what’s the truth?  Well, I’ll leave that up for you to decide.  But here are some things to consider before you make up your mind:

For starters, you should check out Ms. Hammer’s write up about the bill, which was published by the NRA-ILA.  She explains the whole process and the limited occasions on when the law would apply. Here’s an excerpt from it:

It ONLY applies to people with mental illnesses who are already in a mental health facility under a Baker Act petition AND who have subsequently been diagnosed as being an imminent danger to self or others.

The bill has two triggers:  the Baker Act commitment and the diagnosis of being an imminent danger to self or others. The bill has no effect on anyone else.

Additionally, Miami-Dade County Court Judge Steve Leifman told the Times/Herald that “only 1 percent of the 115,000 people processed under the Baker Act last year were involuntarily committed. The other 99 percent voluntarily submitted to treatment, which means they could purchase guns upon their release.”

In other words, were the law to take effect, all 115,000 people would be entered into the NICS database and prohibited from purchasing a firearm until they proved that they were successfully treated and no longer a danger to themselves or others.

Leifman believes that the law would help to prevent suicides as much as it might reduce violent crime, but to what extent it would do either is unclear.

Beyond that, here are some questions to ponder: Is the law necessary?  Will it really save lives?  Would it potentially scare individuals from seeking mental health treatment even though it only applies to individuals who are examined under the Baker Act?  Are there any unintended consequences of the law?