The National Shooting Sports Foundation, the trade association for the firearms, ammunition, hunting and shooting sports industry, published the results on Monday of a study they conducted on first-time gun buyers. There were several key findings in the study, although many not that surprising.

The study showed that the top reason first-time buyers purchased a firearm was for home defense, followed by self-defense, which is a particularly high priority for women. Another motivating factor for purchasing a firearm was the desire to become involved in shooting related activities with family and friends. 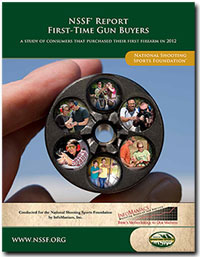 First-time buyers that were 55- to 65-years-old indicated during the study that another reason for purchasing a firearm was the concern for future availability.

About 43 percent of first-time buyers bought their guns from local gun shops and about 33 percent purchased them at mass retailers. $515 was the average spent on the first firearm with an additional $504 average for accessories. About one-fourth of first-time buyers bought an additional gun within the first year after their initial purchase, most spending more on secondary purchases.

The study revealed that most first-time gun buyers are active in at least one sort of shooting activity. The most popular activity is target shooting, which is enjoyed by over 84 percent of respondents. Hunting is the second most popular, with nearly 38 percent saying they enjoyed this activity. Other activities for first-time buyers included plinking at 27.4 percent, practical pistol shooting at 17.3 percent and clay-target shooting at 14.6 percent.

Additionally, about half of all first-time buyers who have participated in hunting, practical pistol shooting, clay target shooting and gun collecting stated that they wanted to participate in these activities even more than they currently do.

The study also revealed that first-time gun buyers are active in the firearms community, with over 60 percent using their guns at least monthly, and one in five using them once a week or more.

The study was completed to find motivations for first-time firearm purchases, as well as how those guns are being used. It was conducted online, in March and April of 2013. Participants were between the ages of 22 and 65 and all bought their first firearm in 2012. The information for the survey was gathered by a third party, InfoManiacs, Inc.