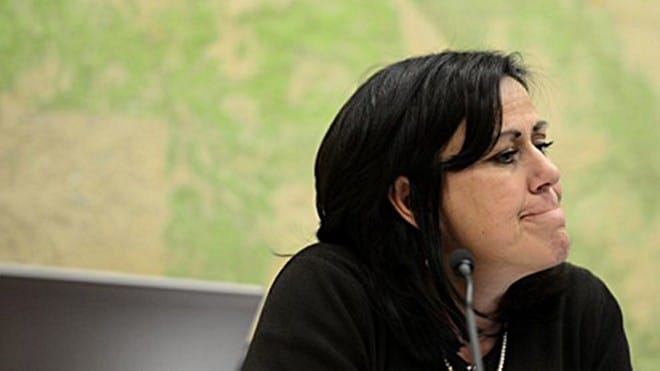 The new gun control bills include mandatory background checks and magazine capacity limits, which are fairly unwelcome in the state’s southern city and county of Pueblo, Giron’s district.

Gun rights advocates collected 13,466 signatures, more than the necessary 11,285 needed to kick off a recall election. The Colorado secretary of state has validated 12,648 of those signature, clearing the minimum number by no small margin.

Giron is the second state senator to face a recall election after pushing for the controversial gun bills, following in the footsteps of Colorado Senate President John Morse (D-Colo. Springs).

The recall election was largely the effort of the Pueblo Freedom and Rights group, a pro-gun organization lead by brothers Victor and Adam Head.

“Giron’s disregard for the majority of her constituents to vote no on anti-Second Amendment issues and her general disregard of our Constitution and the rights of the citizens of Colorado demonstrates she must be removed from the Senate,” said Victor Head, president of Pueblo Freedom and Rights.

“She just didn’t listen to the people of Pueblo. That’s why we’re recalling her. Our employee did not listen to her bosses,” said Adam Head, the group’s vice president. 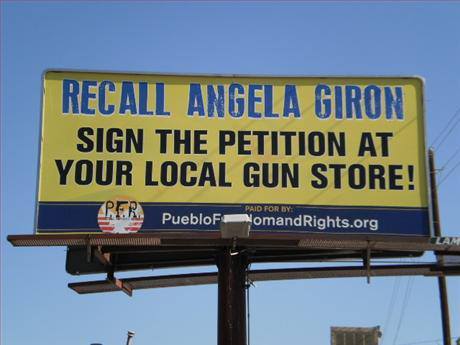 Nothing says “we got your back” like a billboard demanding you be fired.

Giron was confident that she would not face a recall election at a conference held earlier this week, reported The Denver Post. “Through all of this, I’ve had my constituents — who are gun owners — come to me and say they support the work we did in the legislature,” said the senator.

Giron believed that her constituents would not be able to gather enough valid signatures to move on with the recall election. However, Pueblo Freedom and Rights was careful when collecting signatures, pre-validating them as best they could before handing them over to the secretary of state.

“We were doing the work of the secretary of state before they even received the signatures … We knew what would be valid and what would not,” said Victor Head.

“We only had about 6 percent of our signatures rejected and that was mostly due to the error of a notary public,” he said.

“The signatures verified clearly shows a lot of passion in her district,” said political analyst Floyd Ciruli to the Denver Post. “And in a recall election, there’s going to be low turnout, which raises questions if she can get her supporters out there.”

“This will be a major fight,” Ciruli added. “In Pueblo she’s tied into the political circles and can get out her message and quite possibly the vote.” Giron is married to Pueblo City Council President Steve Nawrocki.

If these recalls go to the ballot, they will be the first in the state’s history.

Both sides drew flack during the signature collection phase. Some gun rights supporters made serious personal attacks toward the senator and pretended to be Communists and Marxists in support of Giron.

“I know they’re not part of our core group,” said Victor Head. “They definitely have the right to free speech, they can stand out there and support whoever they want but we don’t condone it.”

“When people are hollering out ‘You need to be deported,’ you ask, what does that have to do with anything we’re talking about here?” asked Giron.

Some Pueblo Freedom and Rights supporters posited that they were in fact Giron supporters who were out there to make gun rights advocates look bad.

Despite these efforts, the recall is now firmly underway.