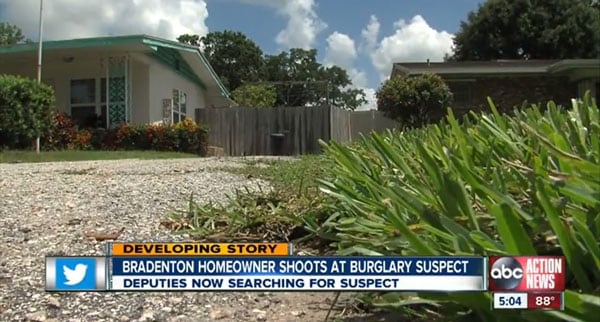 An 84-year-old Florida man returned home with his wife Sunday afternoon only to find a burglar’s car parked in his driveway and the man stuffing the resident’s belongings into his car. After several warnings, the elderly man shot at the robber, but now the homeowner is the one who will possibly face charges.

When Tony DiSanto, who everyone knows as “Mr. Tony,” interrupted the burglary in progress, he armed himself and confronted the man. All the while, his wife was blaring the horn of their car to get the attention of neighbors.

One neighbor, Kristi Patterson, told reporters that she heard the horn and ran to see what was the matter, initially concerned that there was a medical emergency with the elderly couple. As she came to their aid, she witnessed the entire incident unfold.

“He yelled for the boy to stop. The boy was ramming his car into the fence back there; ramming it into Mr. Tony’s car, trying to get out of there. Mr. Tony asked him to stop several times. He didn’t. He shot at the vehicle. The boy came through the other yard and missed me by about that much and he shot at the vehicle again,” Patterson recalled. The boy then drove down the street in reverse, so nobody was able to get a license plate number.

Apparently, amidst the commotion, Mr. Tony also struck a neighbor’s SUV with a bullet from his handgun.

However, according to Dave Bristow of the Manatee Sheriff’s Office, the manner in which Mr. Tony fired his gun is questionable.

“We’re still investigating the case. But he apparently fired shots while the vehicle was fleeing, so that’s questionable, and so, yes, the investigation continues and we’ll probably end up sending it to the State Attorney’s Office,” he said.

A possibility that Mr. Tony’s neighbor’s, who say he did the right thing, aren’t happy about. “Nobody was afraid of Mr. Tony,” Patterson said. “We were afraid of the criminal.”

No injuries were reported and the case is currently still under investigation.

Mr. Tony is declining to talk with reporters, but as Patterson said, “Well, I don’t blame him. I think he’s a little shook up.”