A first of its’ kind but hopefully not the last, Run4Guns is a charity 5K and fundraiser that expects to raise awareness of firearms and open-carry. Participants are not only allowed but encouraged to carry firearms during the race. It will be held in Spanish Fork Utah on Sept. 21.

The event is a way to stand up for Second Amendment rights and proceeds from the race will be used to support victims and families of victims of gun violence.

“We are giving the proceeds of this event to the victims or their families. We also believe that we are part of the solution to prevent future victims of gun violence,” reads the Run4Guns website. “We believe that our efforts increase awareness of the right to keep and bear arms and of the support for its protection. We hope that increasing numbers of citizens will exercise this right, putting firearms in the hands of responsible law abiding citizens.” 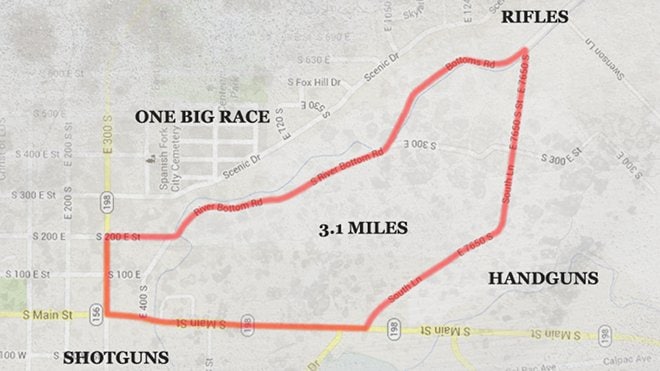 “One of the biggest misconceptions about gun violence is that we, as a society, can prevent it by limiting firearm ownership.” said Macgregor Whiting, one of the race’s directors to the Standard-Examiner. “Efforts to limit gun ownership have instead left law-abiding citizens complacently unaware and increasingly vulnerable.”

“We believe that our efforts increase awareness of the ‘right to keep and bear arms’ and of the support for its protection,” Whiting added. “We hope that increasing numbers of citizens will exercise this right, putting firearms in the hands of responsible law abiding citizens.”

The event will have two races, one five-kilometer jog and another half-mile sprint called “the armed dash.”

Participants will get limited-edition Run4Guns T-shirts for attending the races.

Being a fundraiser, participants can pay for entry into the armed dash for $15 and the 5K for $20. They’re also accepting donations just for the cause.

Run4Guns is also setting up an online store where people from all across the country can buy open-carry race clothes. They also encourage everyone to check out OpenCarry.org.

Participants are asked to obey all laws, and only people 18 and older are allowed to open-carry while running, in accordance with Utah law, but anyone 14 and older can join in the races.

We also suggest that all participants bring good gun belts, holsters with adequate retention for sprinting and jogging and comfortable slings for anyone sporting a long gun.

This is a neat way to promote gun rights including the right to carry firearms outside of the home. For more information check out their website (still under construction at the time of writing), their Facebook page, their Twitter feed and their Google Plus “social layer.”