Tossing a net at wrongdoers is hardly a new police tactic, but it may be given a fresh face in southeast Asia as a new “fishnet launching”, supposedly gun destined to arm traffic cops up and down the China Sea, flirts with mass production.  Sunday, officials with the Weapon Design Institute in Vietnam and Colonel LeVan Nghiem, head of a provincial police force, hinted that they will copyright and manufacture an undisclosed number of ‘net guns’ from a prototype that has been in use since April to combat illegal racing. 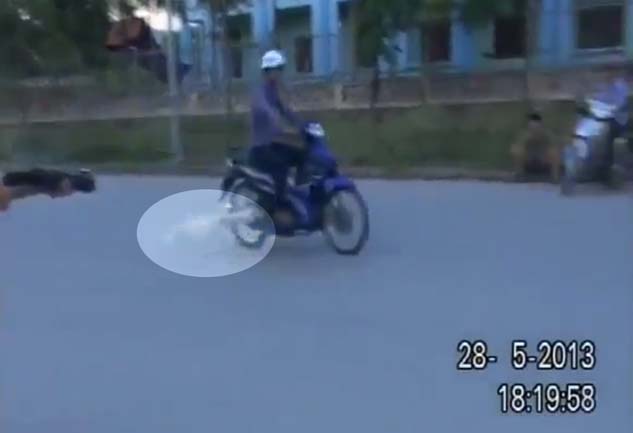 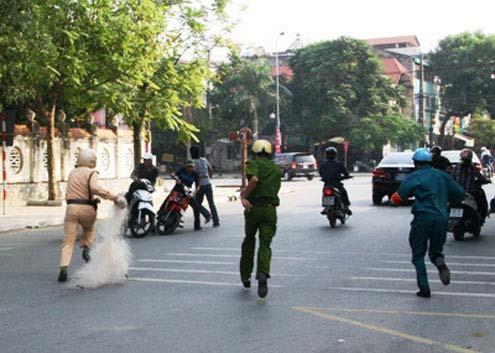 Police in Vietnam attempt to net racers by hand, prompting the development of this net launching device.

The idea for these guns comes from the industrial Thanh Hoa, province on the north-central coast where motorbikes rule the roads (about one bike per three people), and illegal street racing had become a serious problem. So much of a problem that in 2011 local authorities began the dangerous practice of pursuing racing motorcycles and other tollbooth dodgers with nets, tossing them at the fleeing criminals, and prompting the Defense ministry labs to create the first of these devices.  First put to use in October, they were removed from service by March 2012 amid controversy only to return to police armories the next year.  Since then, the strange looking tubes have been credited with bringing down several racing rings. 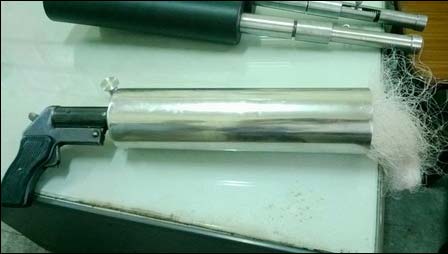 What amounts visually to pistol grip with a tailpipe stuck on the end, these 6-pound, 20-inch tubes can fling fishnets 3 ½ feet wide and weighing a little over half pound about 50 feet.  That’s about five times farther than by hand.  The nets aren’t necessarily designed to cover motorists, rather the net is usually shot at the back wheel, forcing the driver to gradually stop.  Perhaps this is why The Weapon Design Institute has stated that the use of fishnets to stop the violators “does not cause severe consequences”.

Looks like the whole nation is lining up to get theirs too.