TrackingPoint, the maker of some of the coolest smart scopes to hit the shooting world ever, is looking for their next shooting platform. In that search they’re turning to the general public, asking consumers what they’d be most interested in seeing next.

The TrackingPoint smart scope, or “Intelligent Digital Tracking Scope,” is a rifle scope system paired with an image recognition system and a ballistics calculator, rangefinder and all the other equipment needed to precisely determine the flight path of a bullet — out to 1,000 yards.

TrackingPoint recently teamed up with Remington to develop rifle packages equipped with their ITDS scopes earlier this year after proving their equipment capable and, frankly, idiot-proof.

Right now they’re offering three types of smart scope-equipped rifles, all bolt-action rifles chambered in decidedly magnum calibers. Now they’re turning to the shooting community to find out what they’d like to see next from TrackingPoint with a public online poll. 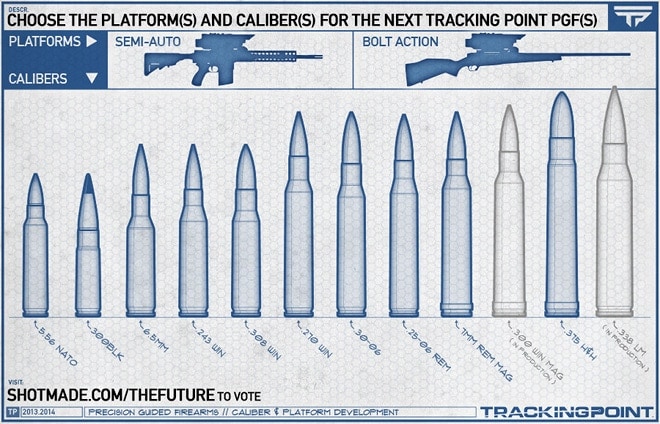 TrackingPoint would like to hear if shooters want to see their next rifle designed around a semi-automatic AR-type gun or if they should stick with precision long-range guns.

An AR with a smart scope would be extremely popular particularly if they could shrink the optic down to a size befitting of the lightweight rifles.

It wouldn’t necessarily need to be an AR-15-based rifle, either, as calibers such as .308 and .243 Winchester and 6.5mm Creedmoore work great in the AR-10 platform.

But it also wouldn’t surprise us to see people go in for another bolt-action rifle, especially in calibers like .270 Winchester and .30-06 Springfield. These cartridges are well-excepted in the long-range shooting world, for both hunting and target shooting. Ammo availability is also good for both of these rounds, even now when most stock is intermittent at best.

And a .375 Holland & Holland Magnum would be an instant success with exotic big game hunters, even in a single-shot package. Not to mention, target a demographic that can afford these rifle systems.

What we expect most people ultimately want is a TrackingPoint smart scope that’s more affordable, no matter what rifle and cartridge it’s designed around. Right now, these small-run, hand-made computer-operated rifle packages run up to $27,500, which is simply out of reach for the vast majority of shooters.

Whether you’re a hunter, target shooter or actual sniper, shooting is expensive; but a sticker in the tens of thousands of dollars puts TrackingPoint’s current offerings into a category of guns accessible to a tiny fraction of gun enthusiasts.

Granted, the TrackingPoint system will make one ragged hole up close and hit targets half a mile out every time; it’s a technology that will forever change shooting in all its forms. It’s just that right now it’s not for everyone.

Still, with a new platform and more customers the cost of manufacturing these smart scopes is sure to decline. While the system is expensive now, like all technology, in a few years, TrackingPoint will just be another option when building your rifle.

To participate, just click on the link here, fill out the form, add your email and submit. As an incentive, TrackingPoint is giving away a gift bag to every hundredth entry (1 out of 100). Polls close July 30.