If we said it before, we’ve said it hundred times: cameramen have a thankless job.

Around 11:15 am yesterday in Willimantic, Connecticut, 34-year old Andrew Samuolis (the suspect pictured in the video) reportedly shot at officers responding to an anonymous 911 caller who asked police to check on Samuolis’ Tunxis lane residence.  After hitting the officer, Samuolis took to the woods, prompting dozens of officers to initiate a manhunt and attracting Channel 3 Eyewitness news cameras, who, as you can see from the video, caught up with the alleged shooter before police.

In the video, the cameraman loudly identifies Samuolis’ position, who then presents himself to the camera and puts what appears to be a semi-automatic handgun to the side of his head.  The shooter also appears to be wearing some sort of body armor but what has only been reported by police as a “tan vest”.  Samoulis then turns the gun on the camera and commences firing at the hapless reporter desperately seeks cover in his news van, exclaiming to unseen persons “he fired at me!” 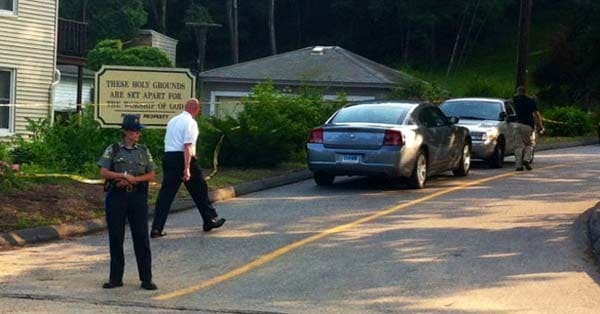 The news crew called the police who were able to apprehend Samuolis with the help of a K9 unit.  He is currently being held on $1 million bail.  The officer he shot suffered injuries to his arm but is expected to recover, however police found a dead body in Samuolis’ home after the incident.  An autopsy is being performed to determine how and how long ago the man died and if there is any evidence that implicates Samuolis.

Our thoughts are with the injured officer and also the cameraman who nearly lost his life just doing his job and an important one at that.  Being the world’s eyes is tough — especially when you don’t have any arms.