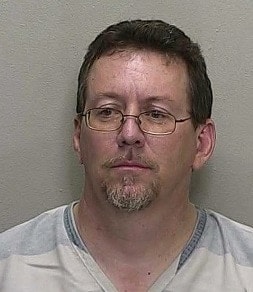 Marion County deputies confronted Charles Lester, 48, at his home in Ocala, Florida, after receiving information that he was “building machine guns inside his home,” according to a police report filed by Deputy Tiffany Warren.

Warren was also told that Lester was carrying firearms and had threatened to kill anyone who spoke openly about his guns.

Warren, along with several other officers, waited outside Lester’s vacant home until he arrived.  When he pulled in the driveway, deputies told him to slowly get out of his vehicle and to put his hands over his head.

Officers found two automatic handguns on Lester, a .40 caliber and a .22 caliber.  Lester did not have a valid concealed carry permit.

Warren then requested a search warrant to raid Lester’s home.  After the search warrant was granted, and with the assistance of the Tactical Investigations Unit, Warren combed through the house.

The search yielded 16 firearms, five of which had been converted to fully autos.  Drug paraphernalia — rolling papers and a glass pipe — were also found.

When asked by investigators if he was a gunsmith or had any kind of official permission to work on firearms and convert semiautomatics to fully automatics, Lester said that he did, though he admitted that he wasn’t a federal firearm licensee and was not allowed to purchase, manufacture or sell fully autos.

However, when detectives looked into his background they discovered that Lester did not have a license to modify firearms in such a manner.

Lester now faces a multitude of firearm and drug-related charges, including: carrying a concealed firearm w/o a permit; carrying a weapon openly; possession of a short barrel gun, rifle or machine gun; two counts of possession of automatic firearms; and possession of drug paraphernalia.

Lester was booked at the Marion County Jail.  He posted a $16,750 bond and was released Tuesday morning.