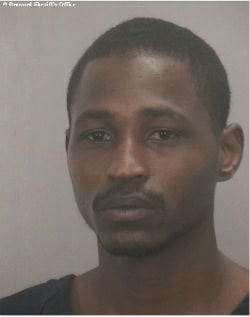 The suspect Roland Stuart, 27. The Broward County Sheriff’s Office is known for their glamour mugs.

Jane Rainboth was lying in bed in her Deerfield Beach, Florida, apartment Monday night when her little dog started barking. She wasn’t quite asleep yet and she knew that with the way he was barking, something wasn’t right. It was about that time that she noticed the masked man standing in her bedroom. Startled, she quickly grabbed the gun she kept on her nightstand drawer, just in case she encountered a situation like this, and starting yelling at the intruder, “I’ve got a gun! I’ve got a gun!”

The man immediately turned and ran the other way, out of the apartment and down the street, with Rainboth chasing him part of the way.

The thing is, the gun she had wasn’t a real gun. It was a realistic-looking black plastic pellet gun, however, it got the job done.

“I guess if somebody tells you they’ve got a gun, you don’t want to stick around to find out if it’s real or not,” she told the Sun Sentinel.

As she ran out after him, she screamed for help and called 911. Police arrived a few minutes later, with Rainboth still holding on to the plastic pellet gun. They discovered that the intruder had cut through the screen door of the patio then pried the glass door open to get inside. 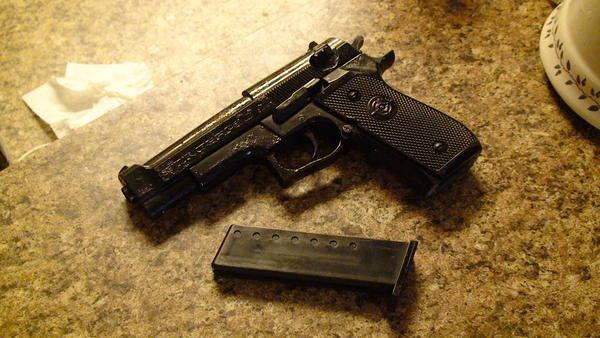 The toy gun appears to be modeled after the Taurus version of a Beretta variant. (Photo credit: Sun Sentinel)

Officers searched the surrounding areas with K-9 units and a helicopter. A short time later, a police dog found the intruder, who was identified as 27-year-old Roland Stuart, also of Deerfield Beach, hiding in a nearby wooded area.

He was arrested and charged with burglary of an occupied dwelling. Broward County Judge John “Jay” Hurley set Stuart’s bond at $75,000.

Rainboth, who is now considering having an alarm system installed, told reporters, “I think everybody needs protection. I felt very vulnerable. … I had nowhere to run.” She recalls the haunting moment she turned to see the man’s white eyes staring at her in the darkness of her own bedroom.

She also said that while she believes he deserves to be punished, “I hope he will learn something from this and maybe think twice before he ever does it again.”