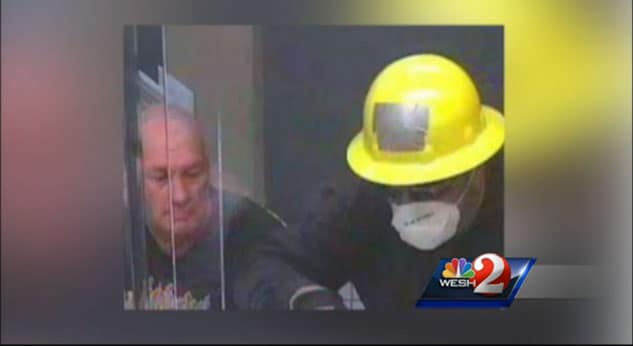 Would-be bank robber and repeat offender, Edward Sotelo, had his plans foiled by a former Marine when he attempted to rob a bank in Cocoa, Florida on Monday.

The Marine, who is also a retired cop, Eugene Storley, was in line at the bank when Sotelo entered wearing a surgical mask and hardhat. Storley, 65, who had half of his stomach removed about seven months ago due to cancer, just said, “You gotta be kidding me.”

Sotelo was armed, but as he struggled to fit the barrel of his pistol through the small hole in the bullet proof panel that stood between him and the teller, that’s when Storley stepped in and attempted to get the gun from him.

“The guy was stupid. I know that. But mostly people are stupid that do stuff like that,” he told reporters.

The two scuffled and although Sotelo got away, he was caught a short time later by police. It turns out that he was also wanted for a similar bank robbery last week.