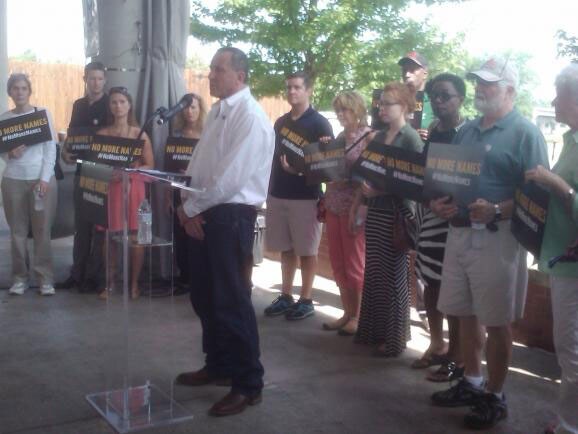 Did all of those guys come with the bus? (Photo credit: Malcom Glover/ UALR Public Radio)

For the second time this month, a gun control rally was held in Little Rock, Arkansas, with only a few supporters in attendance. The rally was held downtown yesterday morning as part of the No More Names tour, which is supported by Mayors Against Illegal Guns and aims to visit 25 cities across the country in 100 days. So far, the tour has shown a lack of support in most cities, and Little Rock was no exception.

The group’s stop in Little Rock was meant to urge Arkansas Sen. Mark Pryor to reconsider his stance on background checks. Pryor has fallen under much scrutiny after he voted against recent legislation for greater gun control, which included expanded background checks.

Mayors Against Illegal Guns, the same group which recently came under fire for claiming the Boston bomber was a victim of gun violence during the No More Names campaign, claims that 84 percent of residents in the Natural State support gun control efforts, including background checks for all gun purchases. However, there was little support shown downtown today. In fact, there was very little, if not any, media coverage of the event.

A similar occurrence happened two weeks ago when Mayors Against Illegal Guns organized another gun control rally, with attendance topping at about 20 people. Local reporters covered that event, in which they described the turnout as “a handful of people.” Apparently, reporters did not even bother covering the second rally which was held today in the historically gun-friendly state of Arkansas.

Of course, the rally was not completely void of supporters. Families of victims of the Newtown mass shooting were present, along with faith leaders and even some local residents. One Arkansas man, Bill Branham, who attended is a gun owner, but also supports the No More Names mission. “I support everything this group is doing. I support enhanced background checks. I support limiting gun magazines to five or ten rounds – no more thirty-round magazines,” he said. “My daughter was killed by a gun in December 2007… I hope some good can come out of this rally and other rallies across the country.” 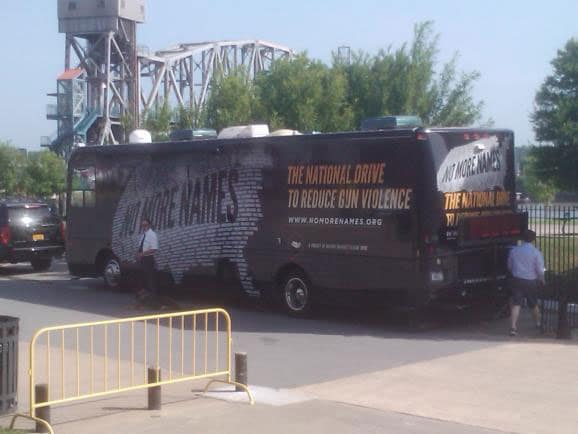 Another local resident, Reverend Elliott Blocker, expressed concern over the high crime rate in Little Rock, which is considered the eighth most dangerous city in the nation for its size.

He stated, “I believe that we, as a people, should unite and it doesn’t matter what your background is, what your educational level is, or your financial status. We all share the same concerns when it comes to gun control. A bullet doesn’t have a name and it doesn’t have a respect of person… various communities should come together and let politicians know our concerns about gun violence.”

And while most do not argue about their concern over gun violence, the argument rather lies in an effective solution to reducing such violence.