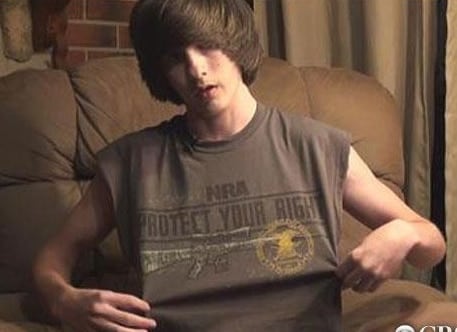 Jared Marcum in the controversial T-shirt and the dismissal order which cleared his name.

In a move that can definitely be considered an all-around win, 14-year-old Jared Marcum, who was suspended and arrested in April over an NRA t-shirt that he wore to school, has had all charges against him dropped. The decision followed massive controversy, including a threat of a gag order.

A local news station reported that the dismissal order signed by Judge Eric O’Briant stated, “The state of West Virginia is not interested in the possibility of creating a juvenile criminal record for this defendant.” A statement which has brought Jared’s mother, Tanya Lardieri, to tears of joy.

“It should have come sooner but it’s done and we don’t have to have that concern anymore about him having a criminal record. I’m just glad that it’s over. His mother is glad it’s over,” Jared’s father, Allen Lardieri told reporters.

Jared’s attorney, Ben White called the decision a win for common sense. And there’s no doubt it was a win for the teen and his family as well as both First and Second Amendment rights. White also told reporters that he hopes the outcome will show that the justice system and its integrity are alive and well in Logan, West Virginia.

The ordeal started back in April when Jared wore an NRA t-shirt to school, which pictured an AR-15. When a teacher asked him to either take the shirt off or turn it inside out and he refused, the police then became involved. Jared was arrested and charged with obstructing an officer.

In the months following the incident, the support for Jared has been phenomenal.

However, even though the charges were dismissed, Jared, his family and his lawyer expect to return to the court house in the very near future, as they plan to file a civil suit against those involved in attempting to strip Jared of his right to wear the shirt.