In the tail end of World War 2, a pair of Soviet ground crew men looked at a shipment of rapid-firing submachine guns and hatched a plan to provide some very rapid firepower to the bottom of a bomber. This idea, brilliant at first thought, but flawed in the end, is remembered as the ‘Fire Hedgehog’. 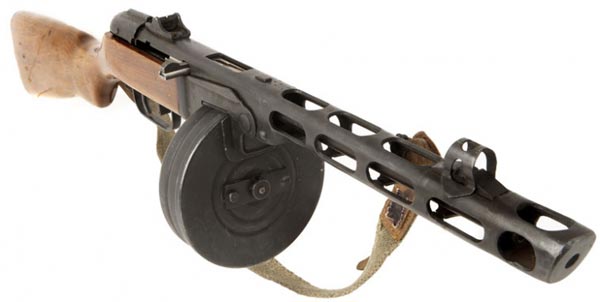 The main ingredient of the Hedgehog was the Pistolet Pulemjot Schpagina model of 1941, or rather just PPSh-41. Its design was by Soviet weapons guru Georgii S. Shpagin and was very basic: a short 33-inch (828mm) long blowback operated fully automatic submachine gun with a 10-inch (265mm) chrome lined barrel inside a wooden stock. It weighed 12 pounds (5.4 kg) when loaded with a 71-round drum magazine or about 9.5 pounds with the more reliable and preferred 35-round box magazine. 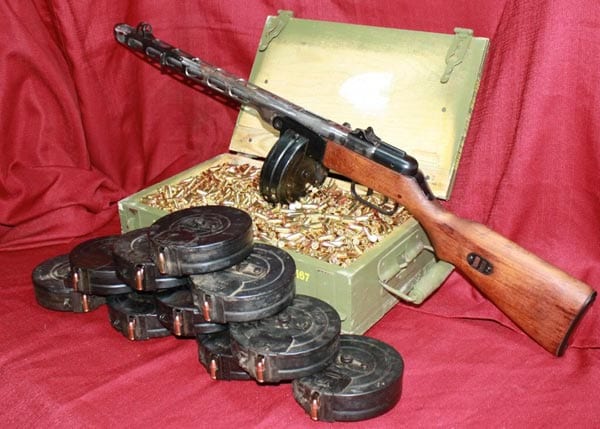 The Soviets made more than 6 million of these room brooms and they are still in use, nearly 70 years later, in hotspots all over the world. It fired the same round as the Soviet Torkarev pistol, the 7.62x25mm cartridge, at a paint-peeling 900-rounds per minute, almost twice as fast as other subguns of its days. 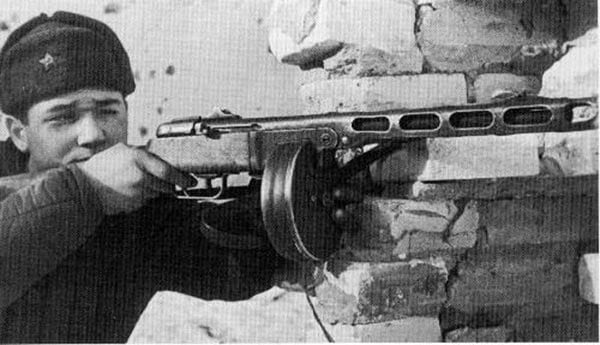 For those who are unfamiliar with it, the 7.62x25mm Tokarev is a zippy little round that is comparable to .38 Super. Today’s commercial loads top out at about 570 ft./lbs of force (comparable to a standard power .44 Mag) out of a handgun and slightly more out of the longer PPSh’s barrel. It would be assumed that the most destructive round fired from the PPSh was the Soviet P-41 loading which was a very hot 74-grain, steel-cored, incendiary variant that could both penetrate mild armor and, as an added bonus, set fire to whatever was inside. With these rounds, the PPSh was part buzz saw/part flamethrower.

A huge number of PPSh-41’s were mounted to a light bomber, the… 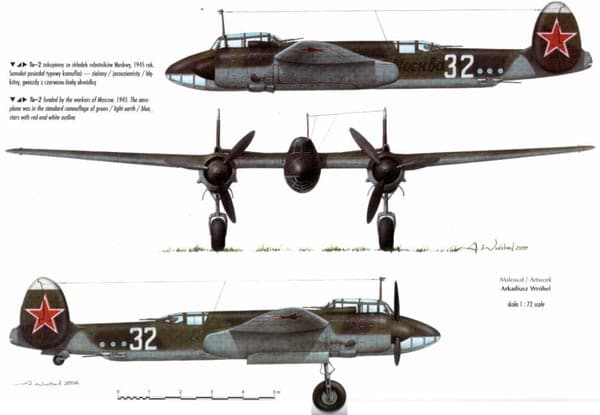 The Tupolev Tu-2 (later NATO reporting name: Bat) was an effective light bomber and high-altitude fighter in the Red Air Force. The famous Andrei Tupolev, while working from one of Stalin’s gulags, designed it and only 2,200 of them were made from 1941-48. By comparison, more than 5800 of the famous B-26 Marauder, the closest American made plane in design, were produced during the same time period. 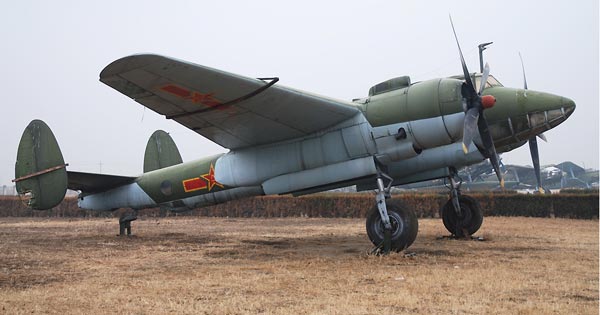 The light but rugged Tupolev Tu-2 was the perfect match for pallets of PPSH-41s. 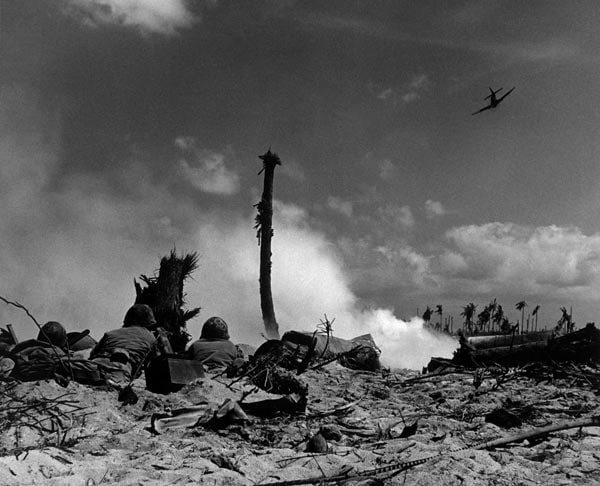 A twin-engine beauty, with long sleek lines and a 61-foot wingspan, it was rugged and easy to fly.  The Tu-2 was so reliable it remained in service with Third world countries until 1982. To protect against gunfire from the ground while strafing enemy troops, it was given an armored plate along the belly of the aircraft while each of the four crewmen (or crew-women as the Soviets had nine combat squadrons flown exclusively by female aircrews) sat in an armored seat for extra insurance.

The aircraft was very effective, and had a high survivability rate. For use in a shturmovic (ground-attack) role, the aircraft carried bombs and was equipped with two forward machine guns firing 20mm rounds and three rear machine guns firing 7.62x54Rmm.  Needless to say, the Tu-2 was a beast, but when fitted with a lot of fixed PPSh submachine guns to its belly, it became something altogether different.

Two Soviet ground personnel, crew chief AV Nadashkevich and lead engineer S. Saveliev thought of an idea to add a removable cassette containing a number of submachine guns to the bottom of a Tu-2 in late 1944. 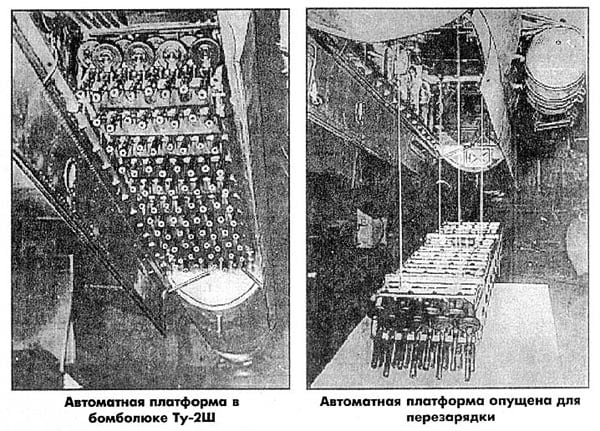 One of few known photographs of the Hedgehog. 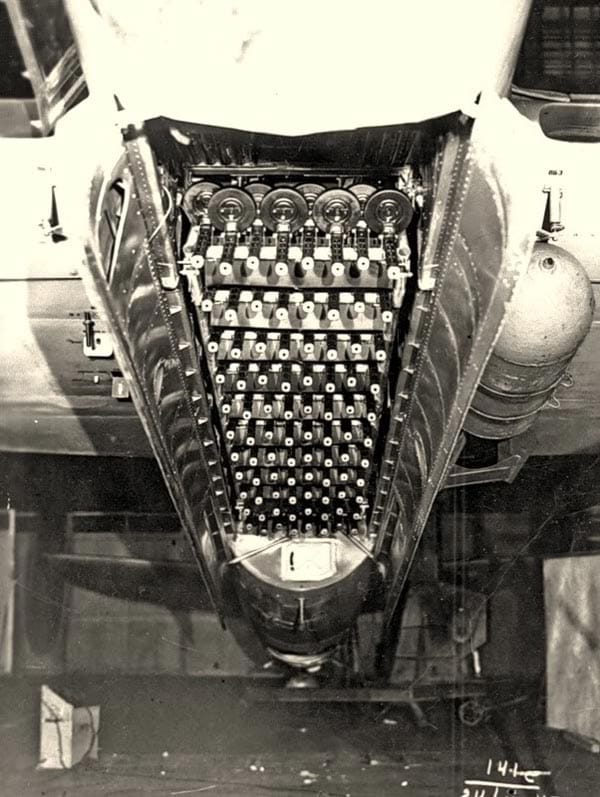 Looking up at 88 PSSH submachine guns, under a Tu-2 light bomber.

The Tupolev had both a bomb bay (for up to 3300-pounds of bombs) and could carry another 5,000-pounds in under-wing hard points. This bomb bay was chosen to accept instead of explosives, a wooden skid that held first 48 and finally 88 PPSh-41 submachine guns, oriented to fire downward. Arranged in 11 rows of eight guns each, the entire affair could be preloaded in the workshop and then raised into the bomb bay of the plane with ropes. A special sight was installed in the cockpit that allowed the pilot to line up the target before depressing a solenoid that fired all 88 of the subguns at once.  It’s unclear who named it, but it’s gone down in history as the Fire Hedgehog, for obvious reasons. The single experimental plane that carried it was designated a Tu-2Sh.

At a rate of fire of 900 rounds per minute (x88 PPSh-41’s mounted on the cassette), you have a theoretical rate for fire 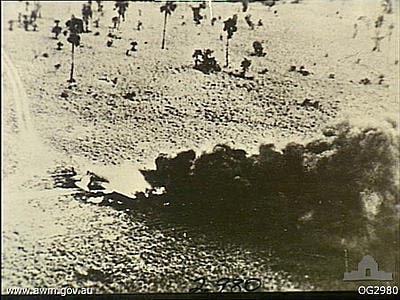 of 79,200 rounds per minute. That’s a lot of firepower, in fact, its 1,320 rounds per second. Of course, each of the mounted subguns only had a 71-round drum mag, which allowed for just over 4-seconds of fire, but before you could say supercalifrangibleballistics, that’s 6248-rounds of incendiary steel-core ammo fired on your head.

With the maximum speed of about 250mph when loaded, the Tu-2Sh could dump these six thousand rounds out over a space of about 1800-feet long and about four feet wide, almost certainly hitting anything inside that kill box. It was thought that the best target for this type of attack would be on a German train. It could strafe the entire length of one from engine to caboose and in seconds turn the whole affair into Swiss cheese, with a Russian aftertaste. 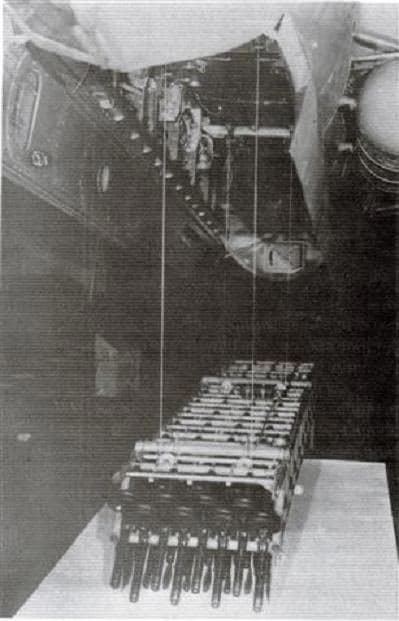 Loading a Hedgehog in the belly of a Tu-2.

As with any truly novel concept, theory did not necessarily translate perfectly to practice.  Loading the 88 drum magazines required something of the order of 100-man hours (have you ever tried?).  Also, once employed, a pilot and flight crew would have literally thousands of spent brass cases flying everywhere, ready to be ingested into the plane’s engines or create jams in the other guns.  Lastly, the plane would have to fly down below 800-feet to even be within range which was also well within range of almost every weapon in the German soldier’s arsenal. This last point was a big detractor.

With the problems outweighing the benefits, the Tu-2Sh never flew in combat. But still, a crazy and somewhat brilliant idea and who knew there were Russian bubbas? We can just picture how this went down:

“Hey, Andrei, what do you think would happen if we took 88 of these here burp guns and tied them to the bottom of that there plane over there?”

Sergei rubs his beard and says, “Hell yeah. We’d better get on that.”