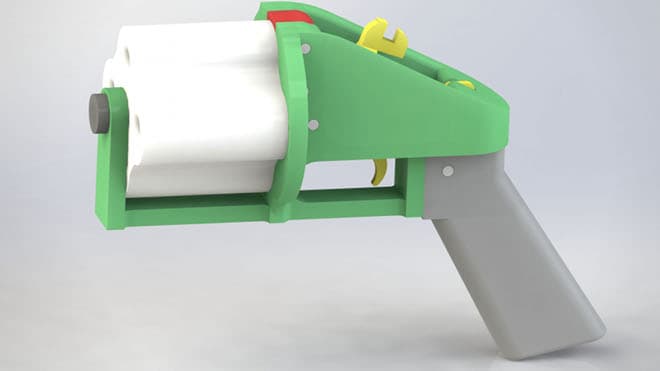 The Liberator pistol was and is an interesting idea. A simple single-shot firearm in the spirit of the FP-45 Liberator — the American-made holdout pistol designed to be dispersed across Axis-occupied Europe during World War II — the Defense Distributed Liberator is considered to be the first entirely 3D-printed handgun.

It’s both a thought experiment and a type of protest: governments can’t control the manufacture of arms, there’s no way to monopolize them.

By turning to 3D printing, Defense Distributed, led by Cody Wilson, the Liberator shows that the ability for the general public to manufacture arms and to share their blueprints is unstoppable.

Of course, the project has been criticized as giving prohibited persons the ability to manufacture arms as well as providing people of countries that forbid gun ownership, in part or in whole, a way to make guns.

And it’s largely impractical. Not only are 3D printers capable of printing a Liberator expensive, especially when compared to the relatively low cost of tools and equipment required to manufacture guns out of metals, the materials 3D printers use make a pretty poor-quality firearm when used to make every part of the gun.

But it’s the start of the decentralization, the democratization of gun-making. These admittedly under-performing guns are the beginning of home-grown firearms driven by shared source code and peer-to-peer hosting.

And for the U.S. government, it put an end to the official Liberator plans by classifying them as military-grade blueprints and ordering Defense Distributed to take them down from their website. 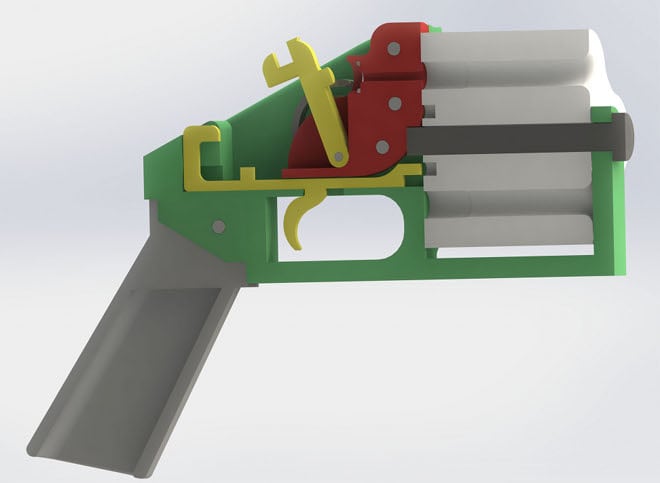 And without support of Defense Distributed the Wiki Weapon project is — doing just fine, actually. Quite well. The 3D printing/gunsmithing community has been maintaining the original plans and updating them and adding new designs as well. By putting the plans online Defense Distributed essentially ensured that there would be no way for any government to prevent them from being obtained by anyone.

The “DEFCAD MEGA PACK,” a collection of restricted and unrestricted 3D printer plans originally put together by Defense Distributed is now up to version 4.4 and includes several firearms not original to the Wiki Weapon project.

Some of the additions are small, including new barrels for the Liberator pistol in an assortment of other calibers including .25 ACP, .44 Special, .45 ACP and 9x18mm Makarov. The original Liberator barrel chambers .380 ACP and can withstand maybe 10 shots before failing.

The barrel just pops off for reloading or replacement, so it’s quite simple to change calibers to work with whatever ammo is on hand.

Some of the other designs are more radical, like the Liberator pepperbox. Also chambered for .380 ACP, this pistol features a four-barreled cylinder that promises increased durability over the original Liberator design and quadruple the capacity.

There is now a Liberator rifle with a beefy sectional barrel — most 3D printers can only make objects up to a certain (small) size — that hopefully does a better job of capturing a cartridge’s energy. The Liberator pistol, with its plastic barrel, flexes allowing some of the burning powder’s gas to escape around the bullet. As such, they aren’t anywhere near as efficient as true steel gun barrels. 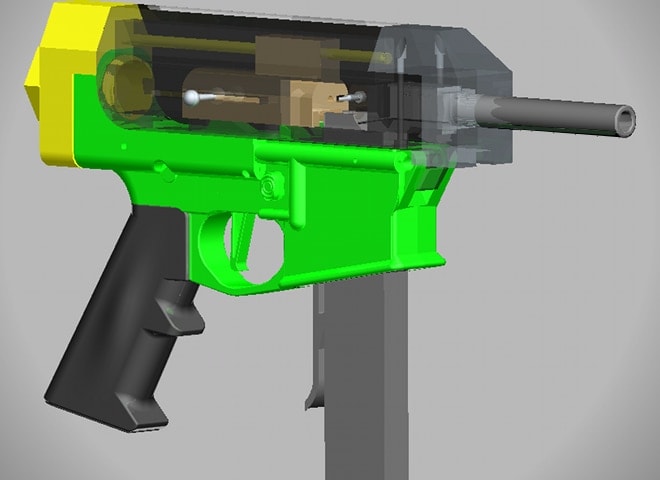 Which is where the “Shuty-9” comes in. A simple blowback pistol designed on a modified AR-15 lower receiver, the Shuty uses a readily-available and almost universally-unregulated spare Glock barrel for real handgun performance. It has an upper that mounts around both the front and the back of the lower receiver to withstand the increased energy and the lower is heavily-reinforced around the buffer tower as well.

The Shuty is a far more complicated design but, like the original Liberator, requires almost no non-3D-printed parts: some screws and naturally, the handgun barrel. While the design is semi-automatic, the Shuty-9 looks like a candidate for the world’s first 3D-printed submachine gun.

The plans also include an UZI-patterned magazine for AR-type receivers.

Included for good measure in version 4.4 of the Mega Pack is a Charon receiver, a 3D-printable AR-15 lower that’s half AR and half FN P90.

As many have said, the genie is out of the bottle. What’s impressive is how quickly it’s moving now.

These updated plans offer a huge upgrade in firepower over the original Liberator in just a few weeks following the announcement and launch of the first 3D-printed pistol.

3D printers aren’t going to go away either — they’re already far more common than they were just a few years ago and many companies are focused on making them affordable for just about everyone — and when 3D printers become an everyday home appliance, it’s clear that these online gunsmiths will be ready with firearm plans that will deliver in a pinch.