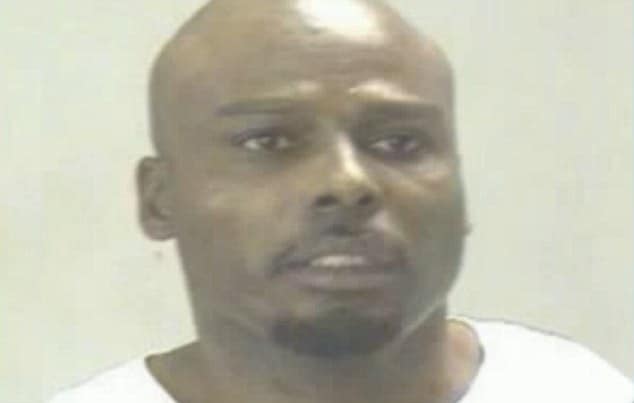 Sammie Wallace, 37, apparently moved to Oklahoma earlier this year after seeing a ghost in his apartment.

The Midwest City Police Department recently released a portion of the surveillance video from the Wal-Mart store where a deranged man took a 2-year-old girl hostage at knifepoint almost two weeks ago. The chilling video shows the moments leading up to the girl’s abduction and the minutes which followed, ultimately ending in the suspect being shot and killed.

The incident occurred on June 17 when Alicia Keating was in a Wal-Mart store just outside of Oklahoma City with her two daughters, ages two and 12. While it appeared to be a regular grocery shopping trip, the young mother had no idea of the nightmare she and her girls were about to undergo.

While the mother had her back to the shopping cart, 37-year-old Sammie Lamont Wallace grabbed the toddler from out of the cart, as the terrified 12-year-old looked on, frozen in fear. He then handed the mother a cell phone and instructed her to call a police officer in Dallas. She struggled to make the phone call, obviously more concerned about the safety of her baby as the stranger held her. The mother began screaming and pleading with man to let her daughter go. At that point, Wallace pulled out a knife and held it to the child’s abdomen, bringing the mother to absolute hysterics.

Fortunately, the police department was just across the street and officers arrived within one minute of being called. They slowly moved in around the man with the child and the mother hopelessly looking on, as the store was evacuated and put on lock down. As the hostage negotiator arrived on the scene, the mother was escorted away. No doubt the minutes which followed were the longest of her life.

After trying to speak with Wallace for more than 30 minutes, he became increasingly agitated and when the toddler began to squirm, Wallace moved the knife from her stomach to her throat. At that point he began a countdown of 60 seconds. Believing that the child had either already been physically harmed or that the harm was imminent, the hostage negotiator, Capt. David Huff took an opportune moment and in a bold and courageous move stepped forward and shot Wallace. The single, nearly point blank gunshot to the head killed him instantly.

The little girl was returned to her mother unharmed.

Authorities were eventually able to contact the officer in Dallas, who said that Wallace had been harassing him with numerous phone calls. He also indicated that the two had no relations other than growing up together when they were younger.

During the standoff, Wallace made mention of several other things, including the Illuminati and George Bush. Upon searching his apartment, authorities also found notebooks filled with some sort of religious writings.

It was additionally discovered that Wallace was a wanted felon who had previously served time in a Texas prison and had a record that included aggravated assault with a deadly weapon, aggravated robbery with a deadly weapon, criminal trespass, harassment and unlawful possession of a firearm by a felon. Wallace’s family also told police that he has a long history of mental illness. However, authorities still have not determined a motive for Wallace’s actions.

Huff, who has been in law enforcement for 22 years, has been hailed a hero and the shooting was deemed as justifiable.