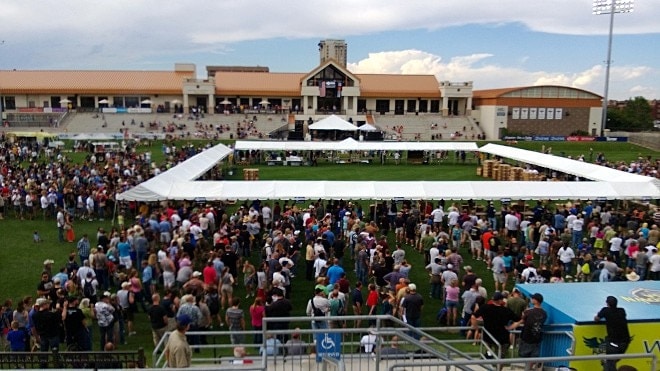 5,000 people line up for their last chance to buy PMAGs.

On Colorado’s gun control eve, over 5,000 people came down to Glendale, a suburb of the capital city of Denver, to attend the Magpul-sponsored Free Colorado event “Farewell to Arms.” This was one last chance to buy Magpul magazines with a capacity greater than 15 rounds before July 1, when new state gun laws take effect.

Magazines were literally airlifted to the event, with a helicopter landing bearing PMAGs and Free Colorado event organizers.

There was also plenty of food, drink and music to rock out to. To be fair, it was mostly country music, but as far as last-minute festivals go, it was enjoyed by all. About the only complaint heard was that Magpul didn’t have any of their new 40-round PMAGs at the event.

Magpul gave away 1,500 special edition magazines to the first 1,500 attendees and also supplied 20- and 30-round 5.56 PMAGs to anyone who made a $10 donation to Free Colorado, a gun rights organization fighting to repeal the laws going into effect today. They also gave away PMAG 20LR magazines for 7.62 NATO rifles for $20 donations.

Attendees could also “pre-purchase” up to three magazines when buying tickets for the event, also one per every $10 donated in addition to the $5 entrance fee.

Altogether, Magpul moved over 20,000 magazines on Saturday, with all of the money raised going to Free Colorado.

In addition to music, Free Colorado had several speakers come to celebrate the event, protest the new laws and get the crowd cheering — and booing, after mention of politicians from across the nation, particularly New York Mayor Mike Bloomberg, who petitioned hard to implement gun control in Colorado.

“And yes, we’ve come to stock up, but we’re also here to send a loud, friggin’ clear message to the politicians in this state: Colorado belongs to us — and not to Michael Bloomberg,” said keynote speaker Kelly Maher.

But the loudest cries and worst name-calling was heard every time Colorado state governor John Hickenlooper’s name was dropped. Hickenlooper ran on a moderate ticket but came down hard in favor of strict gun control earlier this year and is up for re-election in 2014.

“‘Ol’ Hick’ is gonna be hearing from all of us here very soon,” said Maher.

Many Coloradans are unhappy with the new laws, going to far as to recall two state senators, including senate president John Morse (D-Colo. Springs). A recall of senator Angela Giron (D-Pueblo) is also underway.

The legal battle to repeal two of the new gun laws has gained quite a bit of momentum with the vast majority of Colorado sheriffs joining twenty other gun rights organizations, civil rights organizations and big businesses in a federal lawsuit against the state, led by Second Amendment expert and attorney David Kopel.

The complainants are seeking to file an injunction against the bills at a hearing July 10. If they’re successful, the laws will be suspended until the suit is over.

Magpul will be leaving the state in response to the new gun laws even though legislators made an exemption for magazine manufacturing, upon realizing that they had criminalized a major Colorado business.

We caught up with Magpul director Duane Liptak Jr. to see how the move was coming along. While unwilling to share any significant details about the companies plan, he did say the company was considering moving to several neighboring states, possibly splitting their operations across one or more.

Magpul has already begun producing magazines out-of-state, although which state we don’t know.

We asked if Magpul anticipates any reduction in manufacturing and Liptak’s response was an emphatic no, and that they were on their way to deliver their new 7.62x39mm mags for AK-pattern firearms sometime this fall or sooner.