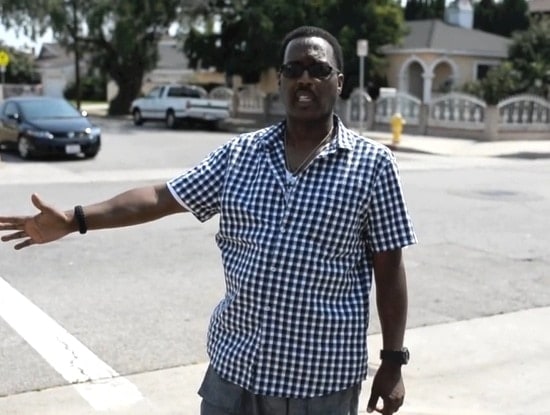 A video which shows police in Hawthorne, California, shooting and killing a man’s dog has gone viral since its posting on Reddit Sunday night, which has now been disabled.

The dog’s owner, Leon Rosby, told reporters that the officer used unnecessary force by killing his dog, which was only trying to protect his master. However, the Hawthorne Police Department states that the action was taken in order to protect both the officers and Rosby.

The incident started when police were called to a house in the area for an armed robbery in progress at an occupied home. Once officers arrived, the robbery quickly turned to a dangerous standoff between the armed intruders and the police. As police vehicles, including an armored tactical vehicle, began to line the streets of the neighborhood, spectators came out as well, many videotaping the events.

During the standoff, Rosby pulled up in his rented black Mazda with his music blaring. The officers asked him to turn the music down so they could hear what was going on with the standoff situation nearby. Rosby pulled his car forward and parked, but left the music playing loudly. He then got out of the car, walking around with his Rottweiler, and also recording the officers.

Once the suspects from the home invasion were in custody, Rosby led his dog to sit in the back seat of his car. Officers approached Rosby and after handcuffing him with the intent to arrest him for interfering with a crime, the dog jumped through the open windows of the car, ran toward Rosby and the officers and started barking. The situation escalated when a third officer approached them.

As the dog was barking continuously, the video appears to show the third officer attempting to reach for the dog’s leash in order to contain him. At that point, the Rottweiler jumped at the officer and that’s when the first shot was fired, followed by three more fatal shots.

Rosby, who already has a pending case against the Hawthorne Police Department for allegedly breaking one of his ribs after they came to his house on a domestic disturbance call, stated that he and his lawyer will be amending the suit to include a claim against the officer for killing his dog, Max, as well.

Rosby’s attorney, Michael Gulden, said, “There’s been a pattern of harassment against him and other African-Americans in Hawthorne.”

Rosby claims that he was not trying to be disruptive during the ordeal, but rather that he was only filming the officers to ensure that “nobody’s civil rights were being violated.”

Rosby is acquainted with the officers of the Hawethorn Police, as he has had previous arrests for resisting, battery and driving under the influence and has also filed a total of six complaints against the department, accusing them of mistreatment and racial profiling. Rosby also insists that the officers were retaliating against him for the complaints that he previously filed.

The police department released a statement, asserting that the totality of the circumstances with Rosby “created an increasingly dangerous situation and demanded officers’ focus away from the matter at hand,” and that is what ultimately led to his arrest.

The statement also concluded that the officer shot the dog in self-defense, “Fearing that the attacking Rottweiler would imminently bite the officer(s).”

Opinions are varied on the incident and comments posted to the video, which is now on YouTube, range from one side to the other:

“If i was there and i saw this…….RIOT!!!! Fuck These fucking pig cop bastard mother fuckers!!! Oink, Oink, Oink you fucking pig bastards!!!!!”

“The policeman clearly tried to grab the dog first to try and restrain it.. Do you food stamp eating, criminal minded idiots, not have eyes?”

The incident is still under investigation.

WARNING: The following video is uncensored and graphic.