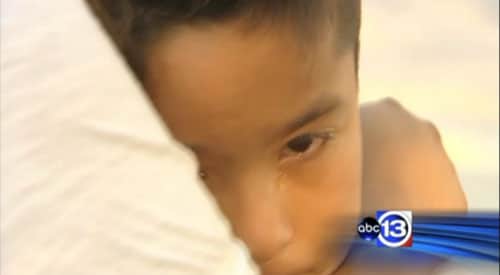 A home invasion in Houston Sunday afternoon ended in two intruders being fatally shot by the resident and a third suspect on the run, according to a local news report.

The incident unfolded around 4:30 p.m. when three armed men came into an apartment asking for money. Only the apartment was occupied at the time by a man, his wife, the couple’s four young children and their uncle. And that father, Javier Ortiz, was also armed.

The oldest child, 7-year-old Fernando Ortiz, witnessed the entire event. He described in broken English seeing his uncle walk into the room with his hands up before the boy’s father grabbed his own gun and shoot at the suspects, fatally hitting two and sending the third running. Fernando said, “I was scared because I thought my dad was going to die.”

Reporters originally believed that the man had only shot one of the intruders and that two had escaped, but police later confirmed that two of the three were shot and killed.

In reference to the search for the third suspect, unfortunately Houston Police Department Homicide Detective Ivan Ulloa said, “We have very, very limited information on that person.”

Authorities did take the father in for routine questioning and said that he was being cooperative. He was later released, and although the case will be referred to a grand jury, as is standard procedure, investigators believe that his use of deadly force was justified, as he was rightfully defending his home and family.

As news of the incident spread, family members showed up to the apartment, even as the media and police were still outside. Ortiz’s cousin, Julio Lopez told reporters, “I’m relieved because it was either him or them. Tragedy, but he’s alive and … he was just protecting his family.”

The mother of the children, Lile Pena, was overcome with emotion as she tried to talk with reporters. And although little Fernando is still very shaken by the whole ordeal, he continues to remember his father’s brave actions, saying, “He’s a great hero.”