Officer who testified in Zimmerman trial wore questionable ribbons, including one from WWII 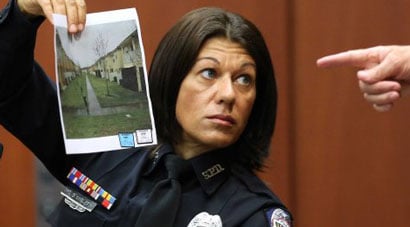 Is it shameful for the department to give the officer a World War II ribbon? (Photo credit: Associated Press)

While watching the Martin-Zimmerman trial this week, combat veteran and Navy Cross recipient, Jeremiah Workman noticed a particularly disturbing decoration on Doris Singleton’s Sanford Police Department uniform when she took the stand. Singleton’s uniform had two ribbons — the World War II Army of Occupation Medal and the Defense Distinguished Service Medal — which Workman knew could not belong to someone who had only served in the Army for three years.

“I worked at the Pentagon with Sgt. Maj. [Carlton] Kent and Gen. [James] Conway for two years and I was around every general in the Marine Corps. I know these high ribbons, I know just about all the ribbons anyways,” Workman told The Marine Corps Times.

Workman, a former Marine who fought in the second battle of Fallujah, posted a picture of the woman on Facebook with the caption, “Am I going blind or is this police officer in the Zimmerman-Martin trial wearing ribbons that she doesn’t rate? I see a WW II army occupation medal and a Defense Distinguished service medal. Wow! On the stand she was asked about her military career. She said army for 3 years. So she received in three years what a 4 star general receives after forty years of service. Wow. What a superb 3 year army career!”

Gina Harkins, who writes for The Military Times, saw the post and contacted Workman, who had already talked with the Sanford Police Department by telephone. He told Harkins that according to the conversation he had with a Sanford PD official, since the department doesn’t have their own awards system, they simply went to the Army-Navy store and picked out Defense Department military ribbons. The official also stated that they intentionally chose World War II ribbons because there are not many veterans still alive from that era and they did not think anyone would notice.

The response left Workman thinking, “So that makes it all better now because these guys are dead?” He told Harkins, “The fact that that was their response is still pretty shameful, I think.”

He questioned, “But what kind of professional police department would send Bob the patrolman around the corner to go pick out some ribbons for our officers to wear when they do something heroic or have good service over the years?”

Workman also said that the official told him that they were working to set up their own awards system.

The police chief, who is also an Air Force veteran, replied to Business Insider via email stating that they “apologize if any veterans were offended, and promise to rectify the situation.”

Also according the website, other veterans have emailed the police chief insisting that the use of the ribbons be immediately stopped.