Teddy Roosevelt, considered by many to be the father of the huge US fleets of the 20th century, once said, ‘Speak softly, but carry a big stick’. Well, the 16-inch/50 caliber Mark 7 cannons of the US Navy’s Iowa class battleships were the biggest stick the country had for over 50 years. 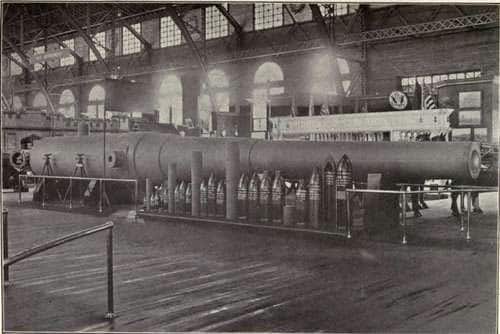 Model of 16 inch gun on exhibition.

In 1938, the world was steaming out of control towards war. Nazi Germany was building a class of huge battleships that carried 15-inch guns. Britain, France, and Italy were responding with huge new warships of their own with similar guns. Imperial Japan, not to be outdone by any navy, was building battleships with 18-inch guns. The US Navy had a few classes of warships that had 16-inch/.45 caliber guns, which were no nerf pistols by any means, but with the naval arms race and the war drums beating, they wanted something bigger and better. This led to the 16-inch/50 caliber Mark 7. 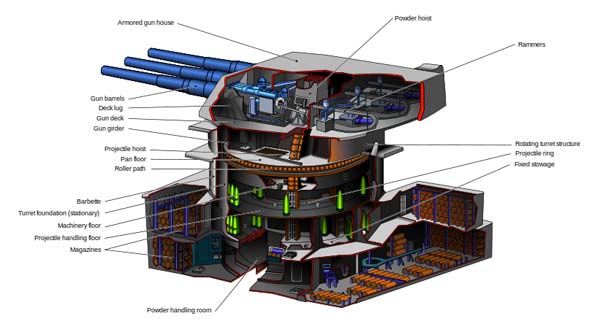 These guns are huge, and were the pinnacle of US Navy artillery design for battleship weapons. Furthermore, they were the largest guns ever used by the US military at the time. Each had a caliber bore of 16-inches wide. In metric terms, that makes these guns 406mm, which are 406 reasons not to pick a fight with the 20th century US Navy. The barrel length was 66 feet, 8-inches, which gives them an artillery ‘caliber’ (length times bore) of 50, this led to their designation of 16-inch/50-caliber guns. 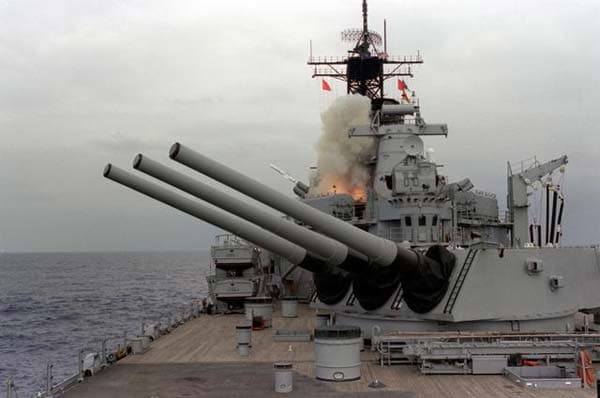 Each of the six new Iowa class battleships was to have nine of these immense guns installed in three armored turrets, each holding three guns. Each turret needed 94 men to operate inside of its 19.7-inch thick armor protection and handle these huge naval cannon. 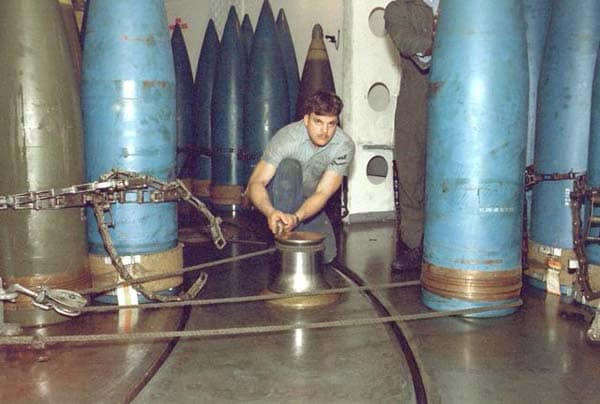 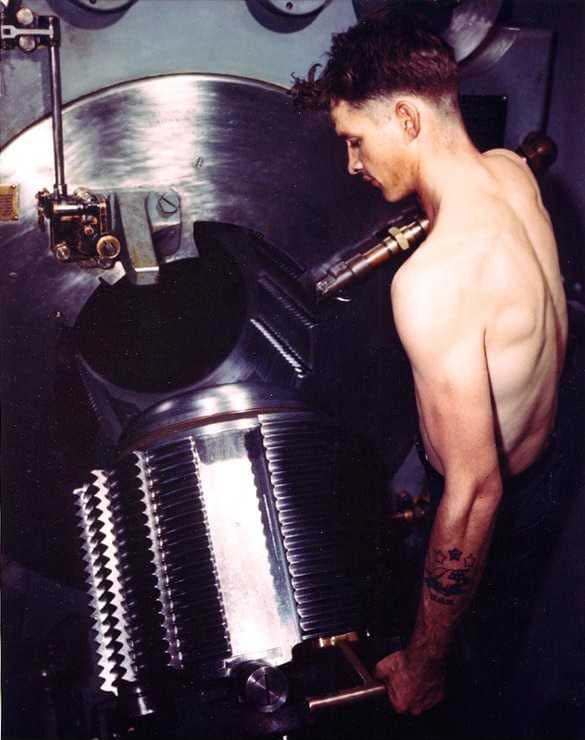 Closing the immense breech of a 16-inch gun.

Huge shells for the guns had to be manhandled using parbucking, which meant taking ropes, blocks and tackle around smooth capstans permanently mounted the deck, to the open breech, where a pneumatic rammer finally loaded them. There were nine different types of shells used over the 50-year lifespan of the guns, the smallest were 1750-pound inert target rounds, and the largest were 2700-pound super heavy Armor Piercing Mk 8 battleship killers. These rounds zipped out at between 2500-2700 fps, which is the same speed as a high velocity bullet from a rifle, only with a projectile about the same weight as a Honda Civic.

Behind the shells were inserted up to six 110-pound silk powder bags of propellant powder with a black powder igniter patch to kick out the round. Over the years, 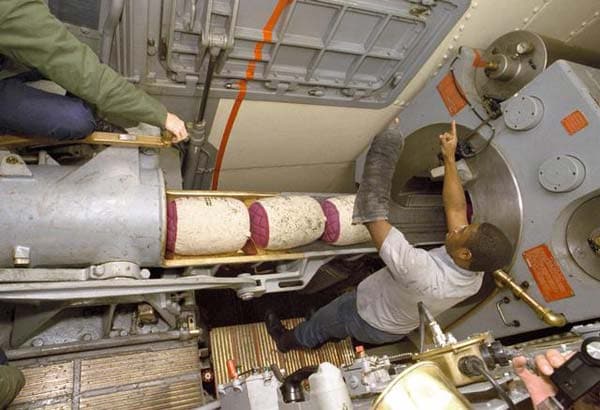 Ramming powder after the projectile into the breech of the USS Iowa’s 16-inch gun.

various flash less charges were experimented with and the propellant changed recipes no less than six times. After each round, a burst of nitrogen would be sent down the barrel to clear any burning embers before the breech was opened. The chrome lined 96-groove barrels were good for up to 1500 shots before the gun was considered worn out.

Fire control used first a 25x optical range finder augmented by spotter planes, then later radar, and finally in the 1990s remotely piloted unmanned aircraft (UAV drones) to correct the fall of shots up to 23-miles away. 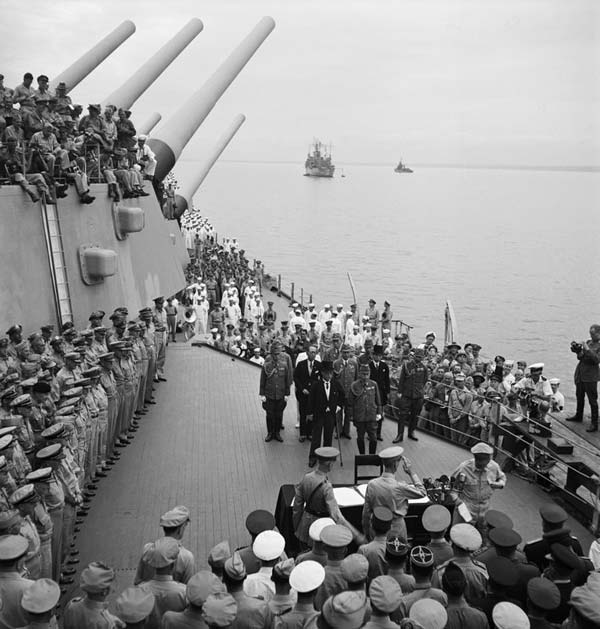 It was under the shadow of 16 inch guns on the battleship Missouri that General MacArthur set up the Japanese surrender ceremony on September 2, 1945.

At the end of the day, these guns were always considered amazingly accurate. In 1987 one of the battleships fired 15 shots on a test range from 19.32 statute miles away and 14 out of 15 landed within 250-yards of the aim point. When you consider that each shell was capable of pounding a building flat, that’s close enough for government work.

During World War 2 the four finished Iowa-class battleships, (Iowa, New Jersey, Missouri, and Wisconsin) conducted extensive naval bombardment of targets across the Pacific theater of operations including Iwo Jima and Okinawa. It was under the shadow of the huge guns of the Missouri that the Japanese signed the articles of surrender in Tokyo Bay. 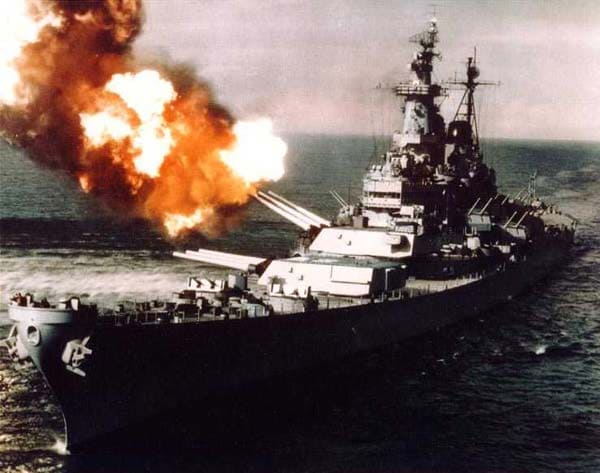 The USS Missouri firing in Korea.

Put out to pasture after the war, the four haze grey bruisers with their combined 36, 16-inch guns were called up to bat to help pummel the North Koreans back in the 1950s, dropping it like it was hot on positions and targets near Songjin, Hŭngnam, and Kojo, North Korea. Again, the ships were placed in reserve until need in the late 1950s. 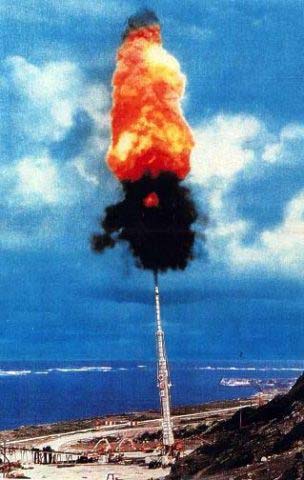 During the 1950s, the Navy wanted to give these guns even bigger, scarier teeth and designed the W23 nuclear artillery shell for them. Only fifty of these 20-kiloton atomic bullets were made for the Iowa’s 16-inchers and they were in service until 1962, when they were quietly placed in storage and thought to have been destroyed by 2004.

In the 1960s, giant gun dreamer Dr. Gerald Bull, who later tried to build Saddam Hussein’s super gun and was given the hard goodbye for his efforts, made history with a 16-inch/50. Taking a test gun given to him by the Navy, he ran Project HARP (High Altitude Research Project) from a field in Barbados. The goal was to test super high altitude projectiles. There, in 1966, the HARP gun fired a projectile to 112 miles high, a world record that still stands. 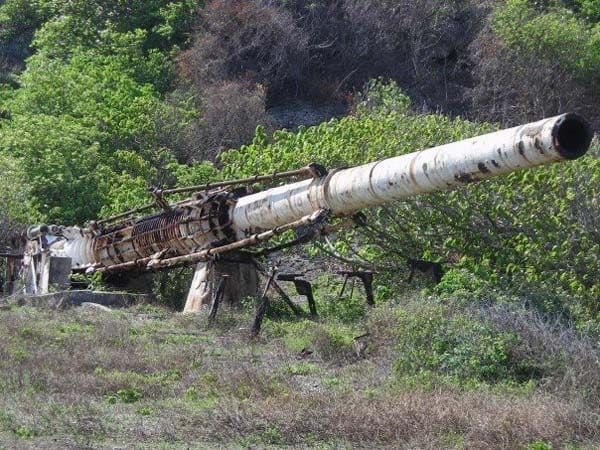 At the peak of the conflict in Vietnam, the New Jersey was pulled back out of mothballs and sent to pound NVA positions in 1968. Some evidence exists that she created instant 200-yard wide helicopter landing zones with each shell impact in dense jungle. 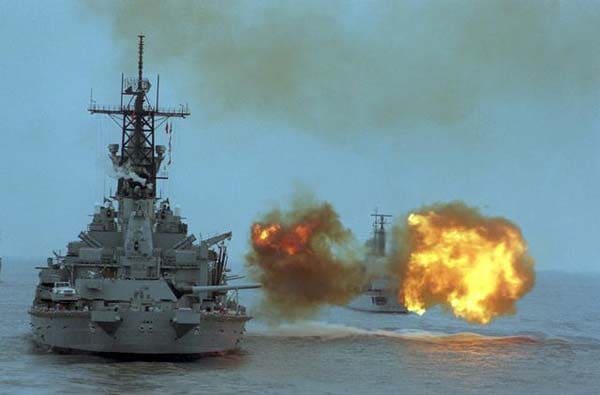 Finally, all four of these arguably antique ships and their remaining 20,000 rounds of 16-inch shells were stood back up in the 1980s when it looked as if the Cold War was warming up—to sink Soviet battlecruisers and hammer Red Army troops if needed. It was estimated that the super heavy AP round could slice through up to 27-feet of reinforced concrete from over five miles away, which made good sense to the Navy. 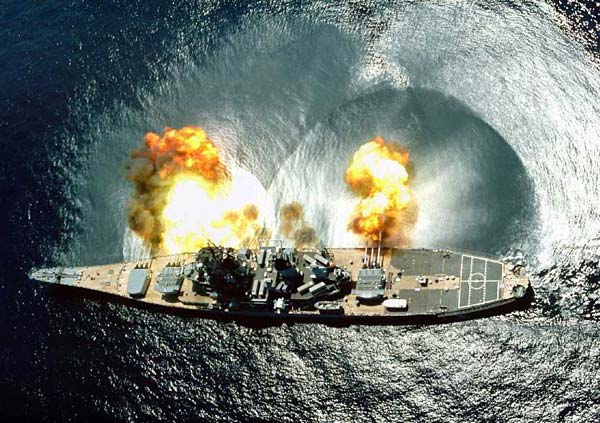 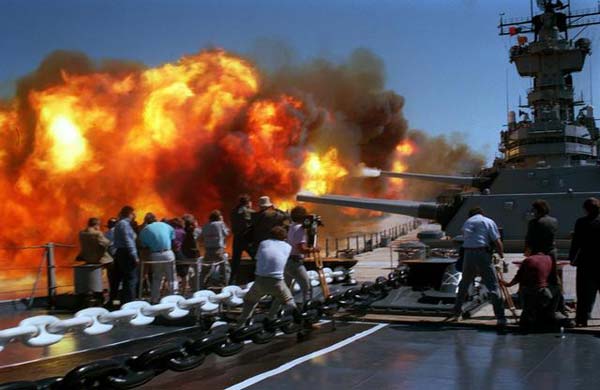 Even though the basic technology and design of the guns was over 50 years old at the time, during the first Gulf War in 1991, the Wisconsin and Missouri fired more than 1000-rounds of 16 inch shells at targets in Kuwait and Iraq, at up to ranges of 20 miles away. This is over 1.5-million tons of ordnance that destroyed command and control facilities, artillery positions, piers, missile sites, and bunkers. It seemed that guns that were good enough to pound Japanese, North Korean, and Vietnamese targets in decades past still worked well enough to give Iraqi targets a good licking. Sadly, in 1989, 47 sailors were killed following an explosion in the turret of the Iowa. 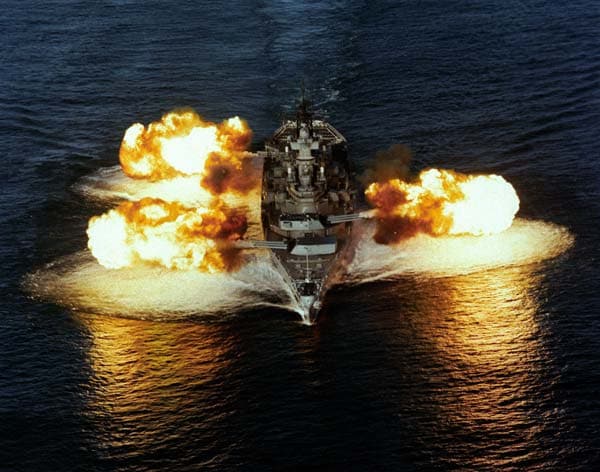 New Jersey shooting out both sides during practice drills.

With no more targets left to go after, the four battleships and their 16-inch guns were placed into reserve for the last time in the 1990s. Today, all of the battleships are retired and their guns stand silent watch as museum ships placed around the country.

How effective were the guns against other battleships? 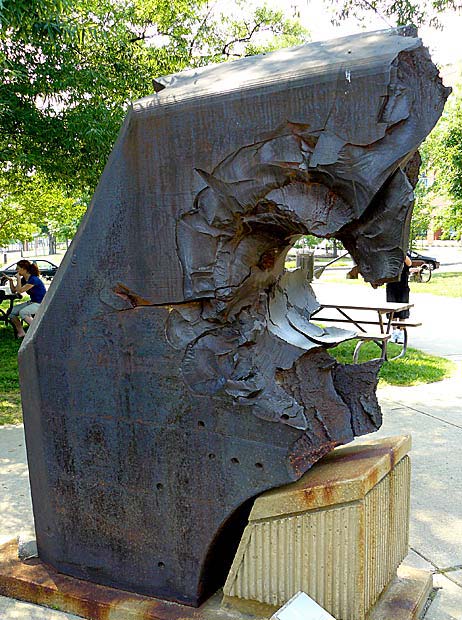 The largest battleship ever put to sea, the Japanese mega warships of the Yamato class, carried armor up to 26-inches thick. While no Iowa class battleship ever fought a Yamato, a section of 26-inch armor plate for these Japanese beasts was found at Kure Naval Base after World War 2. Settling a great historic ‘what if’, the plate was shipped to the US Naval Proving Ground in Dahlgren, Virginia and in tests, was shot at by a 16-inch/50cal armor-piercing round. The results? Zipped right through it like butter. To ensure bragging rights, the armor is on display at the US Navy Museum just in case anyone asked to see the math.

Besides the three dozen 16-inch/50cals that are mounted on the four remaining USS Iowa class battleships, there are a number of spare barrels that are floating around the country that have been placed on display. The museum ships for the most part have barrels that were installed in the 1950s; with their worn WWII barrels placed into storage should they be needed again. 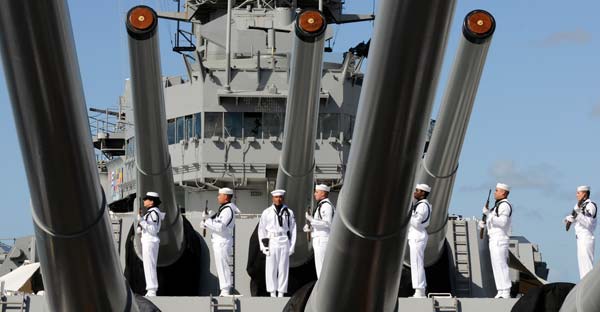 The Navy held on to 22 of these giant, slightly used barrels as late as 2011, when it decided that it just didn’t need them anymore. These barrels had all seen wartime service and were rotated out into storage during refits. In a fit of spring-cleaning on a massive scale, 14 of the barrels, stored in Hawthorne, Nevada, were cut into 8-foot sections and sold for scrap. Eight barrels, located at the St Juliens Creek Naval Annex in Chesapeake, Virginia, were given a brief reprieve to see if anyone wanted them or they would suffer the same fate. 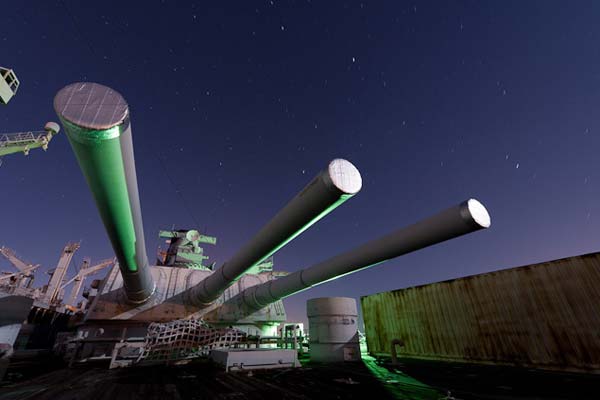 The nonprofit Coast Defense Study Group organization is desperately trying to find museums, cities, and others to adopt these rusting warriors of another age. Over the past two years three were placed in museums ranging from Delaware to Arizona, and the USAF is taking three on for a fuse testing project, but the last two remaining barrels at St Juliens are only being held on a month to month basis.

Each gun weighs 120-tons and is over 68-feet long, which would require special lift cranes and a dedicated oversize hauler or rail flatbed that could transport the immense load from Chesapeake, Virginia.

Some 1,500 inert 16-inch projectiles, each 65 inches tall and weighing 1,750 pounds, are also up for donation. More centrally located, they are stored at Crane Naval Weapons Center in Indiana. If you know some organization that could take a shell or twenty, that’s good, if you know one that can take a cannon, that’s great. Contact Terry McGovern with the CSDG at tcmgovern@att.net or 703-934-3661.

If there is not something done soon, the Navy is going to call the scrappers on these historical guns.