Cabot Guns has been making really exquisite 1911s for five years or so, now.  They’ve made their mark on a very crowded 1911 industry by producing the finest 1911s available.  I know that’s an incendiary claim, but it seems to be the consensus of those who have actually shot them.  No detail is overlooked.  Their guns come with the guarantee that, out of the box, they will exceed National Match standards. 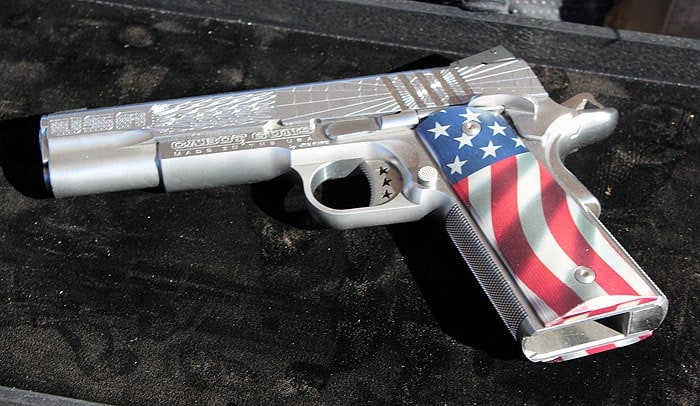 But this new 1911 hardly looks like a Cabot.    The American Joe is an art gun designed in collaboration with “rock star designer” Joe Faris.  It is an homage to Detroit, which has always helped define American culture.

The American Joe sounds so very blue collar.  It sounds like the 1911 you might tuck in the waistband of your Levis, and hide with the tail of your sleeveless Ted Nugent t-shirt.  The American Joe says NASCAR.  And Cabot’s 1911 looks a bit like a NASCAR car, actually, in that every bit of surface area is covered in less-than-subtle engraving and American flags and iconography.  Like maybe you should swallow the “A” and drop the “I” from the word and say it like we do down south.  ‘Mercan Joe.

Yet the American Joe is hardly pedestrian.  It retails for $7,450. 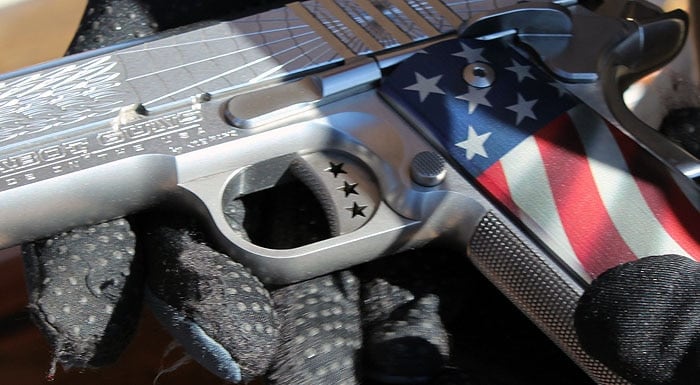 But the American Joe is anything but pedestrian.  Cabot makes the nicest 1911s I’ve ever shot.  I got my hands on a couple of them at the media extravaganza at the SHOT Show this past January.  One of them was the American Joe.  While I wasn’t drawn to the engraving, I have a deep and abiding respect for the gun.  The fit was perfect.  This is hard to describe.  There was no play in the gun, at all, yet it wasn’t stiff or tight.  The slide moved like it was resting on greased rails.  I ended up shooting a left handed and a right handed Cabot, and they both shot flawlessly. 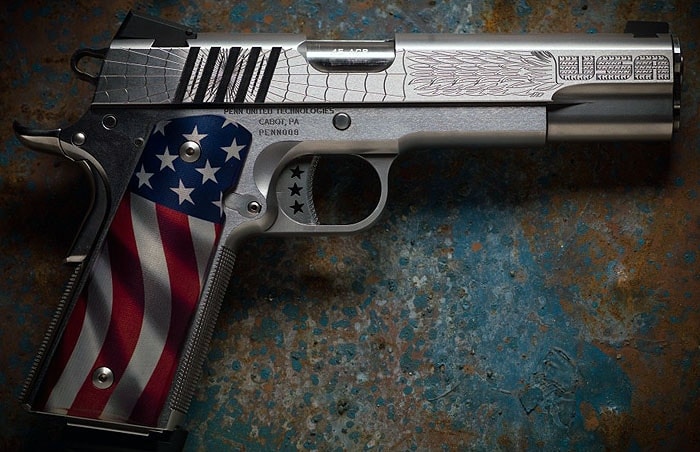 Cabot sets themselves apart by making really slick, tight fitting performance guns.  Their 1911s are superb competition guns for precisely this reason.  The level of craftsmanship removes all doubt about the gun.  And some shooters are willing to pay for that.  They are handmade in America by craftsmen who are not being pushed to produce numbers. 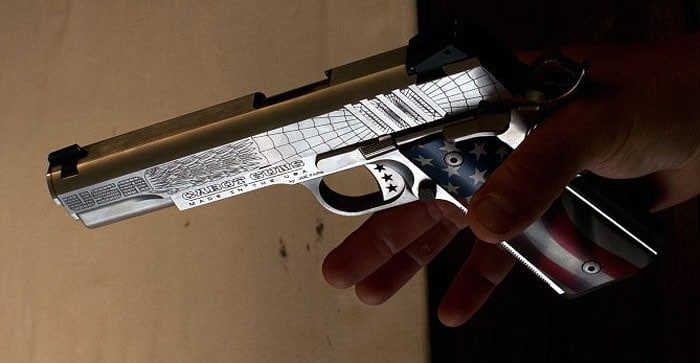 Cabot is also fashionable.  Owning a $5,000 or $7,000 pistol is a status symbol.  They’re rare and wonderful and coveted by those of us who will never have that kind of scratch to spend on a gun.  The American Joe takes that notion of fashion to the next level.

Yet it isn’t an elegant type of fashion.  With the billboard sized tire-print USA on the front end of the stainless steel slide, followed by an homage to eagle’s wings, the engraving lacks some of the cohesive continuity typically found on fashionable guns.  But Cabot doesn’t mind.  They follow the wings with spider webs, a very American motif — one that is common plate engraved bills. 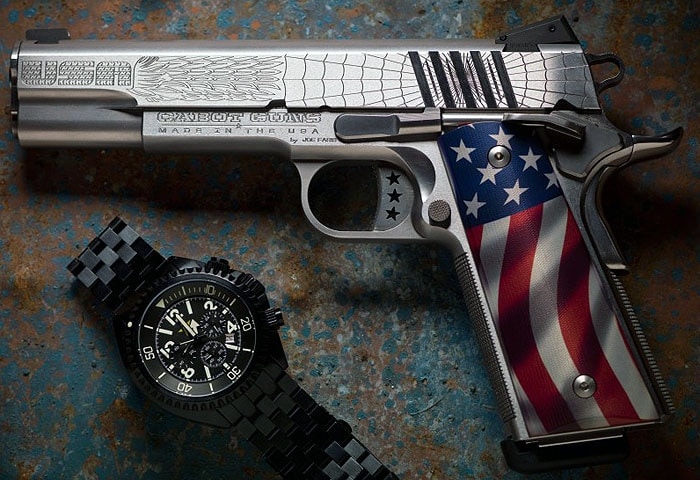 Thant may be the most fascinating aspect of this gun.  While Cabot, and others, are making truly exquisite guns that pair fine bluing and rare wooden grips, the American Joe is shockingly gratuitous.  The engraving is bold and lacks subtlety.  The aluminum American flag inspired grips are gratuitous.  The whole package comes across like a Fourth of July fireworks show.  Loud.  Bright.  And so very American.