M. Peter Kuck, a member of the Connecticut Board of Firearms Permit Examiners, is claiming that Gov. Dannel P. Malloy is trying to oust him from the panel that reviews appeals from residents who have their handgun permits revoked or their applications for such permits denied by local law enforcement officials.

Kuck, a staunch defender of the Second Amendment, has argued that Malloy is gunning for his seat because he is the most pro-gun member on the board. 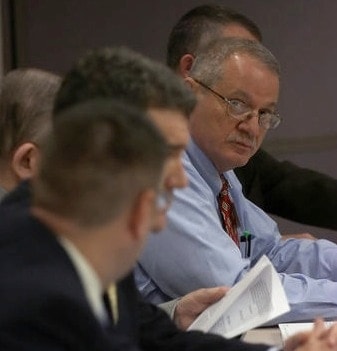 “This is a continuing attempt to put their thumbs on the balance of justice,” Kuck told the Courant after learning that Malloy was seeking new nominees for the board.

On June 25, the governor’s office sent a letter to the Ye Connecticut Gun Guild, a pro-gun organization that is entitled to one seat on the reviews panel, asking the president of the guild to send Malloy a list of four nominees to potentially replace Kuck by July 15.

“The term of office for members of the Board is coterminous with the Governor that appointed each such member,” Malloy wrote to Ed Tytor, president of Ye Connecticut Gun Guild. “Your representative to the Board, M. Peter Kuck, was last appointed by Governor M. Jodi Rell, and, as such, his term has expired.”

The timing of the letter was questionable, in that the day prior to the letter being sent, The Courant ran a profile of Kuck, which discussed how he is the longest serving member and how he votes to overturn local police chiefs and grant pistol permits more frequently than anyone else on the board.

A spokesman for Malloy, Andrew Doba, denied that there was any special motive behind the letter or that the governor was actively seeking to remove Kuck.

“We are currently reviewing all of the expired terms on the board,” Doba told The Courant. “The governor has made no secret of his efforts to improve public safety. Clearly, his work on the gun violence prevention bill was a huge step forward. But making sure the spirit of that law is reflected in the Board of Firearms Permit Examiners must be a part of that effort as well.”

On Tuesday, Malloy himself dismissed the allegation.

“I think we’re just looking to reinvigorate that agency,” Malloy told the CT News Junkie. “Just casting a net to make sure we have good applicants.”

Regardless of what Malloy’s intent is, the President of Ye Connecticut Gun Guild does not envision a scenario where Kuck is not the guild’s representative on the board.

“I think Peter’s done a good job, so why change?” Tytor told The Courant. “I think if I know the membership pretty well, that it will be nearly unanimous that we want Peter to continue this fight.”

Kuck also sees himself as a shoo-in for the job.

“Yes, I will be,” Kuck told the CT News Junkie. “If there’s a Board of Firearms Permit Examiners, I’ll be there.”