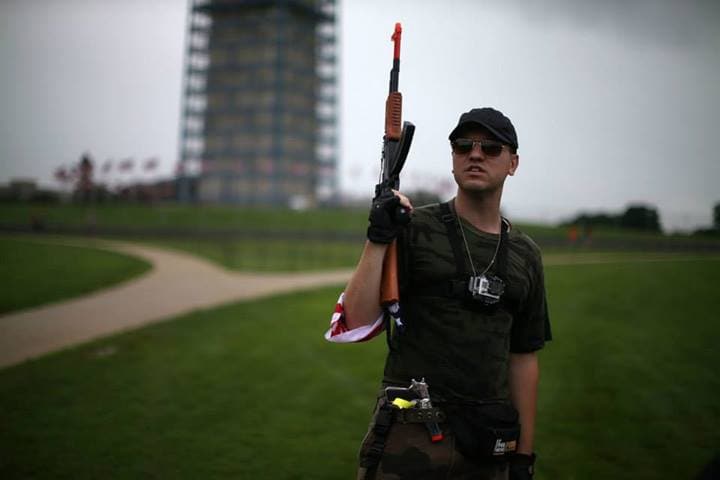 Event organizer Austin Petersen gets ready to get some. (Photo credit: Facebook)

An NBC affiliate reported that activists were armed with toy guns, water pistols and high-capacity Super Soakers while they marched from Arlington to the National Mall for a peaceful protest.

While attendance was much lower than anticipated, event organizer Austin Petersen didn’t seem at all disappointed, as their primary focus was to get their message out, which they successfully did.

The Toy Gun March also picked up a few extra folks on the way to the National Mall. Apparently a father and his two young sons, who were originally on their way to an anti-war protest near the White House, decided to join the water gun ranks instead.

The march also included a Captain America look alike carrying an enormous flag. There were also plenty of family friendly activities, including a gun-shaped Pop Tart eating contest. Participants chewed a Pop Tart into the shape of a gun and the one with the best looking weapon won a prize. The contest was part of a protest against the ridiculously harsh punishments that some young children have been facing over possessing or playing with toy guns or even having objects that resemble guns, such as the boy who was suspended from school over biting a Pop Tart into the shape of a gun and another deaf boy who was asked to change his sign name by his school because it looked too much like a gun. 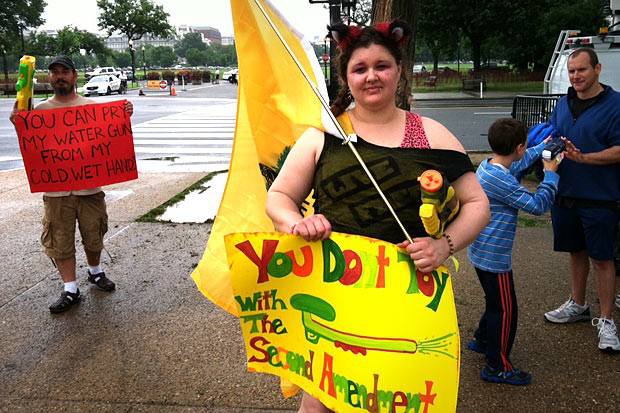 “You can pry my water gun from my cold wet hand.” (Photo credit: Facebook)

The event also collected several boxes of toys as well as a $1,200 check to donate to Toys for Tots.

And, of course, the event wrapped up with a full-fledged water gun battle with a 160-gallon water truck on standby for additional ammo as needed. Just to be sure things didn’t get out of hand, a U.S. Park Police SWAT team observed the entire event from about 50 feet away, as a helicopter circled the area. The officers even confirmed that they were there for the Toy Gun March, although they were also reported to look very bored. However, since the officers were lacking much to do, one participant decided to go report a crime to them, apparently telling the officers that President Barack Obama violated the law by approving bailouts for big banks. When reporters asked one of the officers if they were there to chaperone the event, she rolled her eyes and replied, “I think they’re too old for chaperones.”