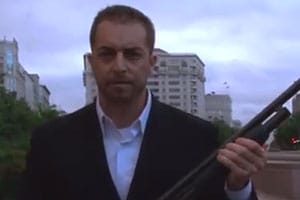 Libertarian radio host, social activist and Iraq war vet, Adam Kokesh may have cancelled the Independence Day armed march to Washington, D.C., but that didn’t stop him from showing up anyway.

Kokesh went to Washington’s Freedom Plaza on July 4 with a shotgun, loaded it while being filmed, and apparently committed at least four felonies in the process.

On Thursday he posted the 23-second video on YouTube, which features Kokesh standing in Freedom Plaza at daybreak holding a 12-gauge shotgun and while loading it, he says, “We will not be silent. We will not obey. We will not allow our government to destroy our humanity. We are the final American revolution. See you next Independence Day.”

The video has – predictably – gained the attention of local law enforcement. The Metropolitan Police Department and United States Park Police, which has jurisdiction over the plaza, issued a statement saying that they are in the process of determining the authenticity of the video. The incident is being investigated and there has been no word yet on whether or not any charges are expected to be filed against Kokesh for his actions.

According to HandgunLaw.us, a website that maintains a database on gun laws, it is illegal to carry firearms in the District of Columbia. In fact, those who own guns in D.C. are required to obtain a permit to purchase them and all firearms must be registered. Guns are not permitted outside of private residences, with very few exceptions.

The open carry march, which Kokesh had originally planned, was met with much resistance from law enforcement and eventually was cancelled because of such.

D.C. Police Chief Cathy Lanier said that in addition to it being a violation of the law to carry firearms in Washington, no permits had been filed to hold the march, warning supporters that they had better “know the rules of the game” before marching to D.C.

Lanier added, “We’ll do everything that we can to make sure that everyone understands exactly what the rules of the game are before they march into a jurisdiction in which the actions they are taking may be illegal, and that there are consequences to those actions.”

Some suggest that the failure of the march was due to inadequate planning and that Kokesh’s reference to “next Independence Day” on his video was foreshadowing better preparations for next year. However, others say that the march wasn’t a failure at all, that Kokesh still protested the draconian laws, which was his original intention.

The video has received over 4,000 comments, most of which are split right down the middle, either completely supporting Kokesh’s actions, or utterly putting him down for one reason or another.

Other than a short and sweet “If you are wasting your time attacking me, what does that say about your relationship with government?” comment on his Facebook page, Kokesh has yet to answer any questions about the video or talk with reporters about the incident.