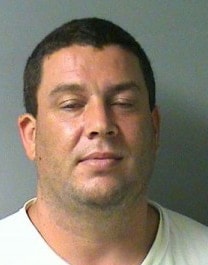 Thomas Lee Sargent forgot to open his eyes for his mugshot.

The resident told police that he and others that were in the home heard a noise, which they thought sounded like someone trying to get in the door, at about 6:15 a.m. One of the residents armed himself with a handgun and went to check it out.

He was surprised to find a man attempting to get into the house, hanging halfway through the doggy door. The resident told police that he saw the man reach for what he thought was a gun, so he fired two shots at him. The man immediately backed out of the doggy door and ran off.

The resident then saw another man standing in the front yard. This man appeared to the homeowner to also raise some sort of weapon, so he fired twice again, causing him to run off.

Police arrived at the house at about 45 minutes later and declared that there was no indication that either of the men were struck by the bullets. However, they did find a set of keys in the yard, which were later found to go to a suspicious car that was parked nearby. In the car deputies found a wallet belonging to Thomas Lee Sargent, 36, of Clearlake. 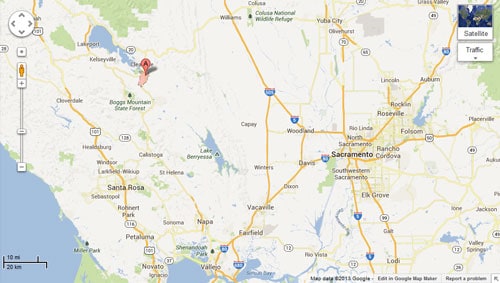 Lower Lake, California is located about 100 miles northwest of Sacramento.

Authorities located Sargent and based on evidence found at the home and statements by witnesses, he was arrested the following day on suspicion of burglary and conspiracy to commit a felony. His bail was set at $30,000, and as of Wednesday he remained in the Lake County Hill Road Correctional Facility.

The second suspect has not yet been found or identified.

Police did not indicate whether they expected any charges to be filed against the homeowner. They also did not reveal whether or not they believed Sargent and the other suspect were armed.