With Ramadan to begin at sunset, Yasiin Bey, the emcee formerly known as Mos Def, has released a video protesting the continued forced feeding of some 40 hunger striking prisoners currently being held at the Guantanamo Bay detention camp in Cuba.

The video opens with a statement that of the 120 hunger striking detainees at the facility, 44 are being fed against their will and that Bey has volunteered to undergo the force feeding procedure practiced on these individuals.  The video crescendos with a distressing scene with at least two faceless attendants giving Bey, now donning an orange jumpsuit and chained to a chair, what is referred to as the “standard operating procedure” for “medical detainees on hunger strike”.  After attempting to insert a feeding tube into his nostril, a sobbing Bey pleads with medical staff (we assume they have medical training) to stop and the procedure ends with heavy crying over the statement that detainees undergo forced feeding “twice a day”, with sessions usually lasting “two hours”. 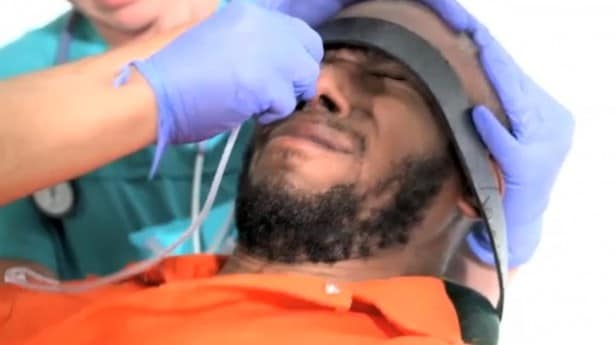 Since it’s release earlier today, the video has found heavy media attention.  A time signature indicates that the video was filmed on June 15, 2013, but the release of the video on the first day of Ramadan (a holy month on the Islamic calendar during which many Muslims fast from sun up to sun down) seems to be the only indication of this protest video’s overall message, which is one of… well, maybe solidarity?

Guns.com understands that force feeding is a pretty invasive procedure and you may not want your kids around when you are watching this video.  But prisoners have to eat too (even if it’s only after sundown).