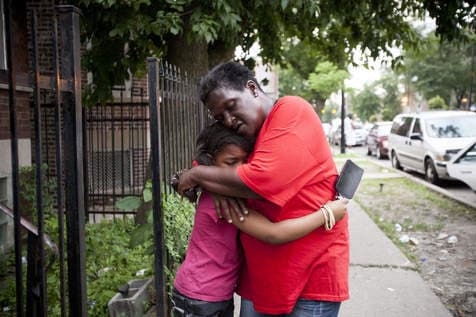 A young girl is comforted near the scene of a gang-related shooting in Chicago this weekend. (Photo credit: Chicago Sun-Times)

As people across the country celebrated Independence Day with friends and family, families in Chicago mourned as a weekend filled with violence claimed the lives of 12 people and left at least 74 more with injuries in a total of 33 separate shootings occurring from 6 p.m. Wednesday until Sunday night.

According to the Chicago Sun-Times, the violence was the result of gang warfare, good weather, easy access to guns and a reluctance of residents to identify those responsible for the shootings.

But unfortunately, the bloody weekend was one typical for the streets of Chicago. Rev. Ira Acree of Greater St. John Bible Church reiterated, “It’s been a crazy week, but this is nothing new. This has been an ugly season for us as it relates to violence.” Even with homicide rates in the city down from last year, the death toll still stood at a staggering 202 for the year by the end of the weekend.

While Gov. Pat Quinn used the violent weekend as an example to gain support for his amendatory veto of the concealed carry bill in order to make “commonsense” changes in the name of safety, others aren’t so convinced that the violence has anything to do with gun laws.

Program manager for the anti-violence group CeaseFire, Rev. Robin Hood said the group recognized increasing tensions brewing in June and that July – historically the hottest and most violent months in the city. He explained that it’s not just gang warfare anymore, that there’s now other chaotic groups settling scores on the streets and in neighborhoods.

Others say that the lack of police presence is contributing to crime in the area.  Ald. Robert Fioretti stated that Mayor Rahm Emanuel has not done an adequate job of replacing retiring officers with new ones.

“Police should have saturated that area for the remainder of this weekend. There is a failure to police the streets,” Fioretti said. Additionally, police “saturation” patrols do not start until 7 p.m.

However, Chicago Police spokesman Adam Collins said they are doing the best they can. “Every day, Chicago Police work to combat crime and violence in close partnership with the communities we serve. We all have a role to play in the safety of our city. And though we’ve had significantly fewer shootings this year, there’s certainly more work to be done and we’re not going to rest until everyone in the city enjoys the same sense of safety,” he said

The youngest victim of the weekend was a 5-year-old boy who remains in the hospital in critical condition. The child’s family was visiting with friends in a park along with about 20 other children when someone drove by and opened fire on the crowd. When gunshots were first heard, everyone thought it was firecrackers. Once it was realized that they were gunshots, terror filled the park. Five-year-old Jaden started running towards his mother, but before he was safely in his mother’s arms he was struck by two bullets. With tear-filled eyes the boy’s mother recalled how in a heartbreaking moment her baby’s white shorts became stained with red.

“It makes me want to go in the house with my kids and never come back out,” the boy’s mother, Jasmine Dillon Donald, said.