A businessman in shot and killed a man who was attempting to steal copper from his company early Monday morning in Reidsville, North Carolina.

Just after 3 a.m., after hearing a security alarm go off next door at Hall Well & Plumbing, Steve Hall, the property owner and vice president of the company, saw two men pushing large rolls of copper wire through his back yard, reports a local news station. So, Hall armed himself and went to confront the men. 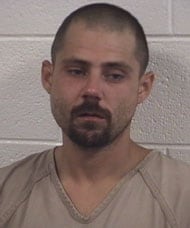 He initially told them to put the copper back and just go away, but when one of the men charged at him, Hall feared for his own safety and shot the man, identified as Jesse Ray Walker. The second suspect, Brandon Joe Hanks ran away as soon as shots were fired.

Walker collapsed and died in front of the business from a single gunshot wound to the torso. Hanks was arrested by deputies in his home later that day and charged with Felony Breaking and Entering, Felony Larceny and Felony Possession of Stolen Property. He remains in jail with a $75,000 bond, awaiting his first court date July 22.

The copper which the men were attempting to steal was valued at about $5,000, and according to Hall and Rockingham County Sheriff Sam Page, this isn’t the first time the business has had trouble with people trying to steal the valuable metal. In fact, the business has been burglarized three times since March. The most recent incident, which still carries a $500 reward by the owners for the arrest of those responsible, ended in over $1,500 worth of copper missing.

Hall, who is a former fire chief for the Monroeton Volunteer Fire Department, is described by neighbors as “good hearted.”

Wesley Moore, Hall’s neighbor, said, “I can’t really say I blame him. You’re depending on these materials, equipment for your livelihood, and for the most part he was standing his ground and doing what anybody would do. He’s a good person, but he was just looking after his own space.”

And local authorities seem to agree with Moore’s opinion.

No charges are expected to be filed against Hall, but ultimately the decision is up to the District Attorney.

Page said that Hall is concerned over the incident, “like anyone else would be when you have to take a life.”