In 1971, Ron Kelly was convicted of possessing a small amount of marijuana.  He was a high school student in Durham, North Carolina, at the time.  Because it was his first and only misdemeanor offense, he was given one year probation.

A few years later, Kelly joined the Army.  He served his country for 20 years and then retired from the Army in 1993.

During his years in the military he operated tanks and fired machine guns and an array of other weapons and, as the Houston Chronicle pointed out in its coverage of Kelly’s story, he probably fired “100,000 rounds of government ammo over his 20 years of service.” 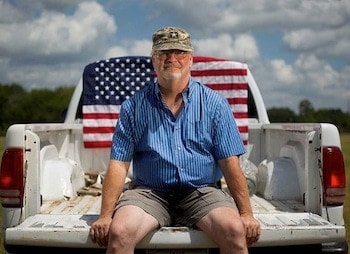 Needless to say, the man knows his way around guns and various weapons systems.

Recently, Kelly went to his local Wal-Mart in Tomball, Texas, to purchase a .22-caliber rifle.  Upon submitting his information to the store clerk to run through the FBI’s criminal background check system Kelly’s transaction was flagged.

Yup, you guessed it.  The 42-year-old pot conviction showed up on the NICS’s check.

At first, Kelly was stunned and embarrassed.  He had completely forgot about his run-in with the law.  But once he figured out what the problem was, he was outraged.

“I am ashamed of the way my government has treated me,” Kelly told The Houston Chronicle, which ran a cover story on Kelly. “The government may have the greatest of intentions with the [law], but they messed it up.”

Under current federal law, only felons and those adjudicated mentally defective are prohibited from possessing firearms.  Though, in some cases, the law also extends to those with domestic violence misdemeanor convictions and individuals who are convicted of a misdemeanor in which they can spend more than two years in prison.

Yet, none of those apply to Kelly.  He is not a felon, he was never adjudicated mentally defective, he has no domestic violence convictions and the federal penalty for pot possession (first offense) carries a max sentence of one year in prison and a $1,000 fine.

But beyond that, and put quite simply, Kelly is a law-abiding citizen.

So, where does this leave him?  Well, without the .22 he wanted.  And, in a position where he has to petition lawmakers to have his Second Amendment rights restored.

Kelly has already contacted U.S. Rep. Michael McCaul (R-Texas) and Sen. John Cornyn (R-Texas), both of whom are known to have strong pro-gun stances (good thing Kelly lives in Texas, and not New York. Can you imagine if he had to reach out to Sen. Chuck Schumer instead?).

Given that he is in Texas, one would imagine that things will work out for him in the long run.

What’s also interesting about this story is that Kelly checked his arrest record in North Carolina, where he was born and raised and cited with the misdemeanor.  State officials could not find the record, which leads one to ask the question, as the Houston Chronicle noted, if his home state can’t find the conviction, how did the FBI?

These stories are not all that uncommon.  Blaze.com cited two similar situations where otherwise law-abiding citizens lost their right to keep and bear arms over minor chargers:

Back in 2006, Paul Stone was convicted of simple marijuana possession, a “minor misdemeanor” under Ohio law. There is no jail time possible for the offense. The maximum penalty is a $150 fine, plus some community service. It is not treated as a criminal record for the purposes of employment or licensing questions about an individual’s past. But in Ohio, the legislature has placed a specific limit on the 2nd amendment related to substance possession. Specifically, Ohio Rev. Code § 2923.13 prohibits gun possession by any person who “has been convicted of any offense involving the illegal possession … in any drug of abuse.”

In February, we reported on Navy vet Jeff Schrader, whose story closely resembles that of Kelly’s. Schrader, too, was convicted of misdemeanor as a young man (for a fight). He paid a $109 fine and went on with his life. But when he tried to buy a gun 45 years later, the law had changed: the misdemeanor penalty for his crime back then, now caries with it a possible penalty of up to two or more years in jail. Because of that, he has been disqualified from owning a gun.