Well, if you do, you can publicly out them by adding their names and addresses to a new Android app called the Gun Geo Marker, a community-sourced database of “irresponsible” gun owners that’s visible to the entire world.

Again, who makes the determination that a gun owner is unsafe, irresponsible or dangerous?

Anonymous users who download the app do based on their discretion of what constitutes safe/unsafe practices and arbitrary guidelines drafted by the app’s creator, University of California San Diego lecturer Brett Stalbaum.

The general guideline is that you should mark any location about which you have a gun related concern, while trying to provide enough extra information for others to make their own determination about safety.

More specifically, the website lists scenarios in which it is okay to expose a gun owner.  If, for example, a gun owner can not recite basic safety rules when asked by the user, he/she should be added to the list:

In any case, it is easy enough to determine through simple conversation if any gun owners knows the basics of gun safety:

– A gun should always be treated as if it is loaded

– Fingers are to stay off the trigger except when firing

If a gun owner can not list these basic safety principles, or demonstrates a cavalier attitude toward gun safety, or becomes angry when you ask about it, then the location at which they store or use their guns should be marked as soon as it is feasible.

So, remember, the next time a neighbor, a relative or even some stranger approaches you and demands that you disclose (a) whether you’re a gun owner (b) where and how you store your guns and (c) basic safety tips on command — you better do it, otherwise you will be added to the ‘irresponsible’ gun owner database.

Not surprisingly, the gun community has not responded well to the Gun Geo Marker and its “name and shame” approach to public safety.

Stalbaum spoke to Fox News about the overall reaction to the app since its launch on July 7. 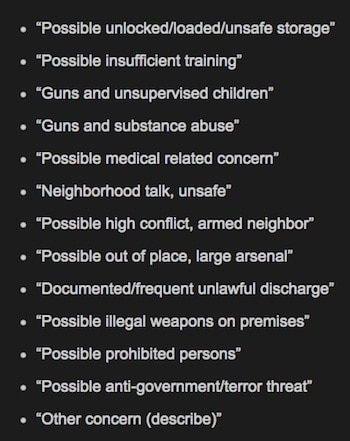 “The gun rights community has been busy making personal threats [we remain unconcerned], as well as spamming the Gun Geo Marker database with false markers,” he told FoxNews.com in an exclusive interview.

“Though these fake markers are not useful for identifying dangerous guns and owners, they are certainly representative of the highly paranoid reaction we have come to expect from any attempt to improve gun safety in the United States,” Stalbaum continued.

“This kind of reaction — automatically lining up on the wrong side of reasonable measures to improve the safe use and ownership of guns — aids and abets the crisis of child shooting deaths,” he concluded.

In short, those who oppose the app are complicit in the accidental shooting deaths of children.  Seems a bit of a stretch, right?

In any event, attempts to out gun owners have been tried before.  In December, following the mass shooting at Sandy Hook Elementary in Newtown, Connecticut, the Journal News, a Manhattan-based newspaper, published an interactive map that contained the names and addresses of pistol permit holders in surrounding areas.

Obviously, this stunt grew the ire of the gun community as well as those who value basic privacy rights.  Thankfully, New York has since passed a law that bans newspapers from publishing the names and addresses of gun owners (it was included as part of the NY SAFE Act; the only pro-gun proposal in the law).

Those who push to publicize the names of gun owners don’t realize that even in its optimal form the interactive map or the list of feckless gun owners is a double-edged sword.  That is, by exposing gun owners one is also, simultaneously, exposing non-gun owners, which is putting people in harms way.

As criminologist John Lott told Fox News, “This makes those who don’t have guns an easier target for criminals. It’s a safety issue.”

While Stalbaum may have noble intentions, i.e., increase public safety and save lives, the real, practical implications of his app do neither.   To tell Stalbaum how you feel about his app, you can visit the website or call his feedback hotline: (225) 267-7346.