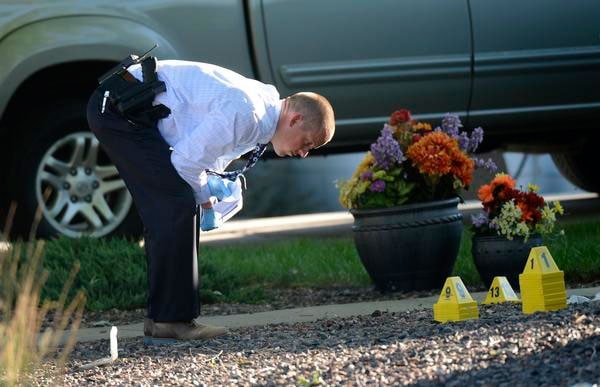 Investigators work to determine what exactly occurred Sunday night when a Denver resident shot a man trying to get into his home. (Photo credit: The Denver Post)

An intruder was shot and killed when he attempted to make his way into a Denver home Sunday night. A local ABC affiliate reported that the suspect tried to force his way inside the house, but left after a confrontation with the homeowner.

Only the man came back and caused some sort of disturbance outside. That’s when the homeowner armed himself and confronted the man again. When the suspect charged at the homeowner, he shot the intruder, fearing for his safety.

Police received a phone call from the homeowner’s girlfriend at about 10 p.m. When officers arrived they found the suspect, later identified as 29-year-old Charles McLaughlin, on the front porch suffering from a gunshot wound. He was transported to a local hospital where he died a short time later.

Neither the homeowner, who remains anonymous, nor his girlfriend knew McLaughlin.

Jack Fried, a nearby neighbor, said that he heard two gunshots before police surrounded the area. He also saw McLaughlin and said that he appeared to be drunk or confused somehow.

McLaughlin’s friends told reporters that he had been depressed for some time and drinking heavily lately. They also said that he lived in that area before and they thought maybe he was mistakenly trying to go into the wrong house.

One friend even said that a break-in was out of character for McLaughlin, who she described as “not aggressive.” However, court records show that McLaughlin was arrested in March for both disorderly conduct and violation of a protection order and he has a six-page Colorado criminal history which includes burglary and auto theft.

Following the shooting, investigators detained the homeowner for questioning, but he has since been released. The investigation is ongoing and the District Attorney will determine if the homeowner will face charges.