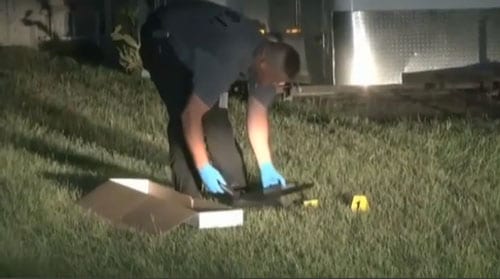 A homeowner in Melbourne, Florida opened fired on a group home invaders who were trying to rob him late Wednesday night. According to a local news report, there were at least three suspects, possibly four, all in their late teens or early twenties and some of them armed.

When Mike Augenti heard his wife scream, he immediately ran to the front door where he was confronted by the group of armed intruders. However, Augenti drew his own gun and started firing at them, a reaction that the suspects were not expecting.

One of the would-be robbers was hit in the arm and leg. The group fled, dropping at least one firearm in the front yard as they made their escape. There are conflicting reports about whether the police gave any details concerning whether or not the intruders also fired back.

Minutes later, 25-year-old Bobby Culler was carried into a nearby hospital by two other people, and police were waiting for them. Culler remains in the hospital recovering from the gunshot wound and was arrested on an outstanding warrant for failure to appear in court for two pending cases of drug possession and resisting police.

Culler was the only person injured during the robbery attempt, but the homeowner’s dog was also struck by a bullet and its condition is unknown at this time.

Leonard Valentine, 18, who accompanied Culler to the hospital, was arrested and charged with armed burglary and a violation of probation. The third individual, Antonio Johnson, was also arrested.

One report stated that a fourth person, the driver of the vehicle, was present at the hospital when the other three were arrested. The driver was taken into custody but released and authorities are still working to determine whether or not he was involved in the home invasion.

Referring to the suspects, Sgt. Sheridan Shelley with Melbourne Police said, “I don’t know what their intentions were; obviously it wasn’t good. They were entering a home that they had no business being in they were armed with firearms.”

“From what we’re looking at right now, it would definitely be a case of self-defense. When you have armed intruders entering your home, you do have that right to defend yourself,” Shelley stated.

Augenti will not face any charges, but he and his family will not remain in their home. “She’s not going to be living here anymore. She’s startled,” Augenti’s sister said of his wife, who was home at the time of the break in, along with their baby.